By:
Lina Morales,
María de los Angeles Rivera,
Francisco Luis,
Isabel Hernández
The minimum global tax continues to be a hot topic in 2021. Negotiations in the implementation of a 15% global corporate minimum tax continue to strengthen and evolve as more countries endorse a deal on a global tax.
Contents

This global tax has been greatly advocated by the Biden administration. Additional related efforts are aimed to stabilize and instill an equitable global tax system and create an environment of cooperation between countries.

As a summary, we recount key events on the proposed tax during the last months:

How about Puerto Rico?

Puerto Rico has been known to attract new companies to do business in Puerto Rico by offering a combination of tax incentives and other competitive advantages. The imposition of a global tax can be a game-changer in the context of pushing the Puerto Rico government to reform other aspects of its business offering in a global economy. To this end, on October 7, 2021, the Governor of Puerto Rico enacted OE-2021-072 (OE) to establish an advisory group to simplify and improve the tax system in Puerto Rico. The OE recognizes the need for a stable economic and tax system model to position Puerto Rico as an attractive jurisdiction to those businesses considering expanding their operations to other jurisdictions in which they can expand their operations. In Puerto Rico, the constant changes over the last few years in the tax system and increasing compliance requirements make applying current tax rules confusing and onerous since the tendency has been on shifting the oversight burdens to the taxpayer and tax preparers.

The enactment of the OE has triggered a massive discussion among professionals in taxes and economy to brainstorm on how the reform should look like. Topics of discussion include the reinforcement of the technological infrastructure of the Puerto Rico Treasury Department, streamlining municipal taxes and creating new consumption taxes. This new tax reform will need to consider the constraints that the national debt and with that, the intervention of the Financial Oversight and Management Board for Puerto Rico has caused. Also, the US Treasury has been knocking on the door to push for an expiration date to the 4% excise tax imposed by Act 154-2010. Act 154-2010 imposed a temporary 4% excise tax on the purchase of certain products manufactured in Puerto Rico. Although the tax was scheduled to end in 2016, its due date has been continuously extended. The removal of the tax will reduce a key income stream for Puerto Rico and sits as an additional factor to consider in the analysis. Although simplifying and stabilizing our tax system is a move forward for competitiveness, it is just a steppingstone within a more complex framework.  To position Puerto Rico as a well-rounded competitive jurisdiction, efforts must tackle other areas of improvement such as removing the red tape surrounding the request of business licenses during an initial set up and stabilizing the crisis of the electric power system. 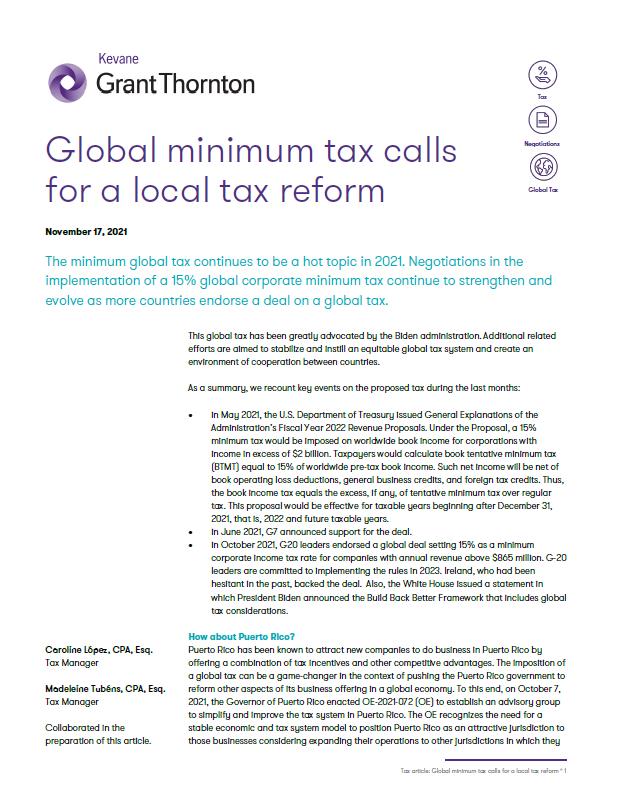