As previously indicated on our November 6, 2017 Tax Alert, the Senate Finance Committee released its version of the U.S. tax reform on November 9, 2017.  Though similar in some areas to House’s bill, the Senate’s proposed plan reveals key differences between the legislative bodies.  It is expected that the Senate will present their plan as a bill in the coming days.  In this Tax Alert we provide an overview of the changes proposed by the Senate.

The Senate’s plan preserves all of the existing seven (7) income brackets, but instead lowers many of applicable tax rates:

The Senate plan also adjusts the bracket thresholds in several places, most notably by following the House’s lead in increasing the threshold at which the top rate applies to $500,000 for single filers and $1 million for joint filers.

It leaves the top rate on capital gains and dividends unchanged at 20%.

the AMT is repealed for businesses and, parallel with the House’s bill, allows taxpayers to claim a 50 percent refund of the unused AMT Credits in each of the years 2019, 2020, and 2021, with all remaining credits claimed in 2022.

Establishment of participation exemption system for taxation of foreign income

With the migration from a worldwide tax regime to a territorial tax system, both legislative bodies agree on the imposition of a one-time tax to domestic companies on the pro rata share of earnings and profits (E&P) of foreign subsidiaries that have not been previously subject to U.S. tax, and their segregation between (i) E&P’s retained as cash or cash equivalents, and (ii) any other E&P.

The Senate is also recommending a minimum tax on certain foreign income.  The U.S. shareholder of one or more controlled foreign corporations would be subject to current U.S. tax on its global intangible low-taxed income (GILTI), which is defined as “the excess of controlled foreign corporations aggregated net income over a “routine return” of 10% on certain qualified tangible assets.”  The plan allows for a deduction equal to 37.5% of its foreign-derived intangible income plus the amount of GILTI included in gross income (subject to a taxable income limitation).

Also, there is a provision to incentivize the repatriation of intangible assets. This incentive would only apply to distributions of intellectual property received by a domestic corporation occurring before the close of the third taxable year of the controlled foreign corporation beginning after Dec. 31, 2017.

Interest Expense of U.S. shareholders which are members of worldwide affiliated groups with domestic indebtedness

As noted on our previous Tax Alert, once the Senate version on the Tax Reform Bill is released and approved by the Senate, a Joint Committee will probably be organized to reconcile the legislations.  This process will take a few weeks but is the intention of the Republicans to approve the Final Conference Bill before the end of the year.  Business should be taking the process and these proposals seriously since the bills would result in a dramatic transformation in the way corporations with international operations are taxed. Business that act quickly and map out a strategy stand to gain significant financial and competitive advantages. 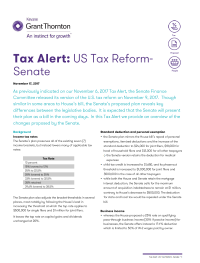