Proposal to address grant and contribution accounting by NFPs

The effective dates would be the same as those for the new revenue guidance in ASC 606, as follows:

Early adoption would be permitted irrespective of whether ASC 606 is early adopted. An entity would be permitted to apply the forthcoming guidance using a retrospective approach or a modified prospective approach. Under the modified prospective approach, revenue or expense not yet recognized prior to the year of adoption (because the agreement either was not completed as of the effective date or was entered into after the effective date) would be recognized in the year of adoption in accordance with the forthcoming guidance. Under this approach, no prior-period results would be restated, and an entity would not make a cumulative-effect adjustment to opening net assets or retained earnings. If an entity chooses this approach, it would also be required to make certain disclosures related to the reasons for, and the quantitative impact of, this change in accounting principle.

The Board has also released a  FASB In Focus, which discusses the proposal in greater detail.

The comment period on the proposed ASU ends on November 1. 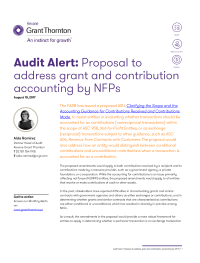