A change is expected in Act 154

The first meeting between Governor Wanda Vázquez and US Secretary of Treasury, Steve Mnuchin (“Secretary”), triggered an anticipated request from the Secretary: the government of Puerto Rico has to identify an alternative to the 4% excise tax of Act 154-2010 (“Excise Tax”). With tax collections of around $1,800 million, the government faces the challenge it knew it would face sooner or later.

The sudden enactment of the Excise Tax on October 2010, which was approved without public hearings, raised concerns regarding the creditability of the tax for US federal income tax purposes. However, other than a credibility and stability issue with foreign corporations doing business in Puerto Rico, the matter laid dormant because the practical effect of Notice No. 2011-29 was that the Excise Tax did not have a significant impact on the tax bills of affected taxpayers because they had a foreign tax credit in their US federal income tax return. Since the core of the issue is in connection to the creditability of the Excise Tax for US federal income tax purposes, it is expected that the conversation will turn into what type of tax should be adopted that is creditable under the current rules of the US Internal Revenue Code (“US Tax Code”).

Currently, the US Tax Code has general provisions of foreign tax credits (“FTC”) and indirect foreign tax credits (“IFTC”). The FTC prevents double taxation of foreign income of US persons by reducing US tax on that income by the amount of income tax paid to foreign governments for example Puerto Rico. The analysis starts with whether the foreign tax is a creditable tax. Section 901 of the US Tax Code limits the credit to foreign taxes imposed on “income, war profits or excess profits.” AN FTC is also allowed for taxes imposed “in-lieu-of” a generally imposed income tax.

For taxable years of foreign corporations beginning after December 31, 2017, a US shareholder is required under §951A of the US Tax Code to include in gross income the “global intangible low-taxed income” (“GILTI”) of its CFC. In connection to IFTC, US corporate shareholders may claim an indirect foreign tax credit for 80% of the foreign tax paid by the shareholders' CFCs that is allocable to GILTI income. The allocable amount of foreign taxes paid is calculated by multiplying an "inclusion percentage" by the foreign income taxes paid that are attributable to the GILTI inclusion. These credits have complex rules, which should be studied carefully as part of the analysis that will be done by the Government of Puerto Rico. 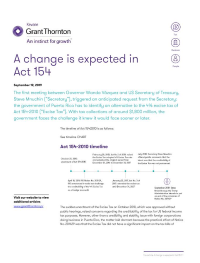