Updates for the Opportunity Zones program are on the horizon

On April 7, 2022, “The Opportunity Zones Transparency, Extension, and Improvement Act,” was introduced through H.R. 7467 and S.4065. The bill is part of a bipartisan effort to reform the Opportunity Zones program to improve the transparency of investments in opportunity zones (OZs) and reinforce the purpose of the OZ program by focusing investment in economically distressed areas. If enacted, the bill would extend the OZ program by two years to facilitate continued investment, increase reporting requirements, decertify Opportunity Zones that are not impoverished, pave the way for small dollar impact investments, and create the “State and Community Dynamism Fund,” which would provide technical assistance and operating support to high poverty and underserved communities. Parallel legislative action must also occur in Puerto Rico to extend local capital gain deferment benefits and lower holding periods.

The U.S. Tax Cuts and Jobs Act of 2017 created the Opportunity Zones program to increase investment in economically distressed communities in all US jurisdictions, including Puerto Rico. US Internal Revenue Code §1400Z-1 created the pathway for low-income communities to be designated as qualified opportunity zones (“QOZs”). To designate the QOZs, census tracts were used. US census data from 2010 was used to determine which census tracts corresponded to economically distressed areas. The designation of census tracts as QOZs remains in effect for ten years. At the same time, §1400Z-2 provides the framework for federal income tax incentives for taxpayers who invest capital gains in businesses operating within a QOZ. The program offers preferential capital gains treatment for investments in areas that have been designated as Opportunity Zones. In general, when an eligible taxpayer realizes an eligible gain and chooses to invest it (totally or partially) within a limited window of time in a qualified opportunity fund (“QOF”), which in turn invests in an opportunity zone (“OZ”), the gain invested on the QOF is deferred. The deferral period for capital gains invested in QOZs is currently expiring on December 31, 2026. In addition, step-up in basis opportunities were available, which decreased the taxable gain realized on the investment on the QOF when the investment was held for five, seven, or ten years, the first two having been currently unavailable due to the 2026 deferment expiration date.  If the investment was held for at

Introduced on April 7, 2022, the proposed legislation seeks to improve the OZ program by increasing reporting requirements for investments in OZs and further refining the requirements for QOZ designation to increase investment in underserved communities that have been historically left behind. If enacted as proposed, this bipartisan, bicameral effort would have the following enhancements to the OZ program:

What does this mean for Puerto Rico?

Puerto Rico is designated as an Opportunity Zone almost in its entirety. We must pay attention to how the changes in census track eligibility may affect Puerto Rico’s current OZ designations. The proposed capital gain deferral extensions can be an opportunity to attract new investments in Puerto Rico. The PR Incentives Code provides additional tax benefits for certain businesses that operate within an OZ structure. Although OZ structures are commonly known to be combined with Priority Project incentives, OZ businesses engaged in eligible activities may qualify for other incentives under the PR Incentives Code if the requirements are met. Some examples include manufacturing and tourism incentives. Our team of experienced tax advisors can assist you in evaluating and establishing the proper business structure for your business and meeting the requirements of the program. For the complete effectiveness of the program in PR as proposed, legislative action must be taken by the Puerto Rico Legislative Assembly to align PR tax deferrals and holding periods with the bill’s extensions. Under the Puerto Rico Internal Revenue Code of 2011, as amended, capital gain deferment at the PR level for OZ investments through PR funds organized in Puerto Rico is set to expire in 2026.

Although this bill has not been approved as of this date, its contents bring to our attention the interest the program is being given. The need for clearer reporting of OZ investments and a deeper impact on the most vulnerable communities has been noted by lawmakers. In addition, the success of the OZ program and the attention it is being given to suggest that the OZ program has a positive outlook for the future. 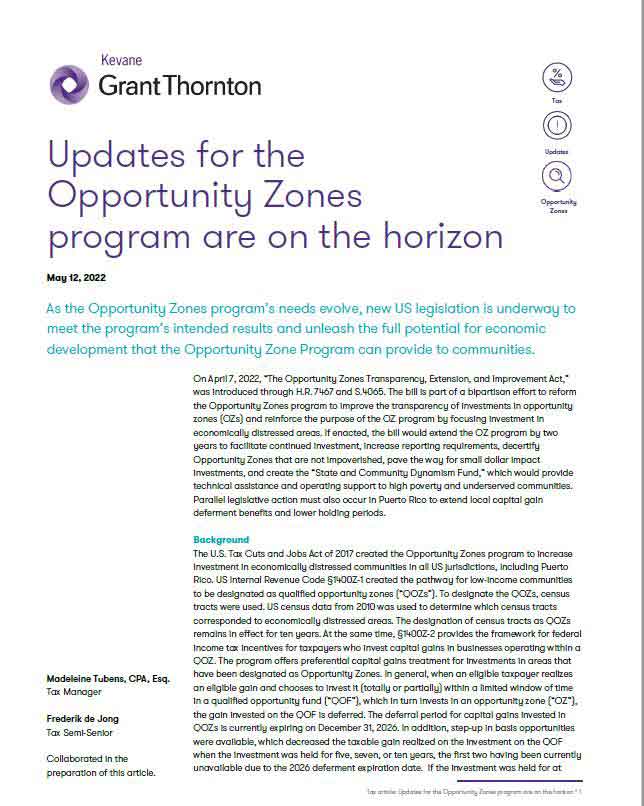