Blockchain technology and the audit profession

Blockchain was developed as the technology principle that sits behind the first crypto currency to go mainstream: Bitcoin.

Created by Satoshi Nakamoto – whose identity has never been revealed – released the whitepaper Bitcoin: A Peer to Peer Electronic Cash System in 2008 that described a “purely peer-to-peer version of electronic cash” known as Bitcoin, blockchain technology made its public debut.

The blockchain is, as Business Insider defined it: “A ledger of all transactions, owned and monitored by everyone but ultimately controlled by none. It's like a giant interactive spreadsheet everyone has access to and updates to confirm each digital credit is unique.”

While there are many potential uses of the blockchain, its initial focus was to create a platform capable of making Bitcoin payments that are freely, openly and securely transferred without the need for central control.

How does it work?

A blockchain is a single ledger that records transactions between organizations, their suppliers and customers. An audit trail is created as data is added in linked “blocks” and as more information is added, a chain of blocks is built. Everybody with permission to join the blockchain can see the same information in real time. Following a list of benefits of the blockchain:

How it could potentially impact the financial statements audit?

Some publications have hinted that blockchain technology might eliminate the need for a financial statement audit by a CPA auditor altogether. If all transactions are captured in an immutable blockchain, then what is left for a CPA auditor to audit?

An audit involves an assessment that recorded transactions are supported by evidence that is relevant, reliable, objective, accurate, and verifiable. The acceptance of a transaction into a reliable blockchain may constitute sufficient appropriate audit evidence for certain financial statement assertions such as the occurrence of the transaction (e.g., that an asset recorded on the blockchain has transferred from a seller to a buyer). For example, in a bitcoin transaction for a product, the transfer of bitcoin is recorded on the blockchain. However, the auditor may or may not be able to determine the product that was delivered by solely evaluating information on the Bitcoin blockchain.

In other words, a transaction recorded in a blockchain may still be:

Furthermore, many transactions recorded in the financial statements reflect estimated values that differ from historical cost. Auditors will still need to consider and perform audit procedures on management’s estimates, even if the underlying transactions are recorded in a blockchain.

They will also need to evaluate management’s accounting policies for digital assets and liabilities, which are currently not directly addressed in international financial reporting standards or in U.S. generally accepted accounting principles. They will need to consider how to tailor audit procedures to take advantage of blockchain benefits as well as address incremental risks.

Evolution of the audit with blockchain

In a blockchain world, the CPA auditor could have near real-time data access via read-only nodes on blockchains. This may allow an auditor to obtain information required for the audit in a consistent, recurring format. By giving CPA auditors access to unalterable audit evidence, the pace of financial reporting and auditing could be improved. In addition, for areas that become automated, they will also need to evaluate and test internal controls over the data integrity of all sources of relevant financial information.

Potential opportunities for future roles of the CPA

Resources:
“Blockchain Technology and Its Potential Impact on the Audit and Assurance Profession” by Chartered Professional Accountants of Canada (CPA Canada) and the American Institute of CPAs (AICPA).

“A Beginner’s Guide to the Blockchain” by Grant Thornton UK

“Blockchain: How does it work?” by Grant Thornton Cambodia

Image - “What is Blockchain Technology?” by Blockgeeks 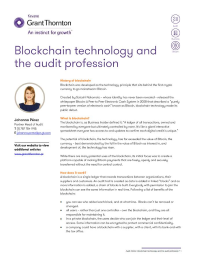