M&A is not the place for rose-colored glasses

Be realistic and skeptical in deal-making, stalled M&A returns, value left on the table, surprises in execution, post-tax reform; M&A investments are in high gear. But even in strong economies, actual performance is still too often not living up to the hype.

As tempting as it is to simply jump into the flow, hold back in favor of meticulous planning and selection. In The Deal’s webcast based on a Grant Thornton survey of top-level execs, Grant Thornton Transaction Services Principal Chris Nemeth said respondents named three areas where their companies could do better:

A whole industry — investment banks, deal brokers and others — shops transactions. “It’s easy for a potential buyer to sit back, receive pitches and deal books, and fall into a pattern of reactivity,” Nemeth said. “It often seems difficult and time consuming to go through a formal planning process and define priorities, then initiate discussions with chosen contacts. But, time and time again, we see that this yields real benefits. Control the pipeline; assemble a profile and be deliberate about whom to target. It’s hard work and takes a lot of effort on the front end. But proactive deals tend to perform a lot better. The close rate is higher, and the post-close performance is better.”

M&A has undergone so many changes that even seasoned buyers are facing a learning curve. The old model was a massive deal every few years done primarily by big companies. In today’s deal economy, deals might be smaller but they’re faster and executed by all kinds of companies.  But as deals become more competitive and leveraged, with market multiples going up and companies being leaner, smart companies are taking the time to proactively build the proper M&A execution capabilities.

Take a holistic approach to due diligence

Historically, M&A has had an almost exclusive financial focus, which is where companies have concentrated their due diligence. “But that’s only one perspective,” Nemeth said. “It’s now clear that we need an encompassing view of the target company. This view is possible only through a holistic business diligence.” A broad and deep assessment is a priority for global equipment supplier SPX Corporation, according to Vice President of Business Development & Strategy Franklin McClelland: “We look at due diligence as much more than a pro forma financial exercise. Ultimately, we want to build an entire picture of the target company, one that not only assesses the financial and operational health of the business, but also attempts to look at the softer elements — things like would the employees fit well, culturally, with our staff. Does management have similar values to ours? Is there clarity of purpose? Ultimately, we need to be able to picture any target being part of the broader SPX family.”

Today, doing a deal well still takes working the numbers, but the people quotient has risen in priority. Virtually all companies are in the people and information business. Even in a traditional manufacturing company, the minority of employees actually touch the product; most are focused on the service of external or internal customers. A successful buyer must value people/culture integration as highly as any other factor.

Focus on the concrete synergies

Nemeth emphasized certainty when it comes to synergies: “From a synergy standpoint, what is shown in the research is when synergies are more controllable — let’s say, more on the cost side as opposed to cross-selling or things dependent on the market — those deals and returns tend to be more predictable. Having a laundry list of theoretical synergies ends up being trickier and not as valuable as a handful of concrete synergies that we know how to execute and can accelerate post-close.”

Be skeptical about every deal

Acquirers shouldn’t assume a deep dive is necessary only for distressed companies, trusting that an apparently flourishing company is a sure bet. “Some healthy skepticism is a good thing,” according to Nemeth. “Even in a high-performing target company, you have to ask yourself, ‘If they’re all that, why are they selling?”

Ungaro advised a careful examination of factors: “Look at things like, Are we reaching the peak of an economic cycle? Are there market tailwinds that have been pushing them along, or is this just a really good management team? We look at revenue recognition policies. Whenever I see profit margins expanding significantly in recent years, we look at things like deferred maintenance.”

Moving too quickly is not an option, said Nemeth: “For something as high stakes as M&A, a ‘We did OK’ is just not good enough. We owe it to each other to figure out how to continue to do better.”

Grant Thornton library articles: M&A is not the place for rose-colored glasses 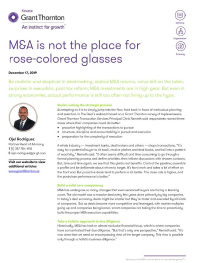