Following the federal government’s lead in this area, the Puerto Rico House of Representatives submitted Bill No. 1887 to create the “Act for the Development of Opportunity Zones and Economic Development of 2018”.

In view of the aforesaid U.S. Tax Reform, House Bill No. 1887 ( “HB 1887” or the “Bill”) was presented to enact a local counterpart to the Qualified Opportunity Zones tax incentives of the former, thus providing potential investors with a higher return on their investments.  In addition, it also provides domestic taxpayers the opportunity to participate in these incentives.

HB 1887 proposes the creation of a “Priority Projects in Opportunity Zones Committee” (the “Committee”), that will be attached to the Governor’s office, which will be comprised by the “Public Chief Financial Officer” (as defined in the Executive Order OE-2013-007), the “Public Chief Investment Officer” (as defined in the Executive Order OE-2018-035) and the Executive Director of the Puerto Rico Fiscal Agency and Financial Advisory Authority.  The Committee is tasked with enacting and adopting the necessary rules and regulations to achieve the purposes of the Bill.

The main task of the Committee is to evaluate written proposals from proponents that wish to participate and enjoy the incentives.  The Committee will evaluate if the proposed operations are “eligible activities” that result from a “Priority Project” in the opportunity zone.  A Priority Project is a trade or business that is engaged in the diversification, recovery, social and economic transformation of the eligible zone, as approved by the Committee.

The concession of incentives under the Bill will be evidenced through the issuance of an exemption decree (the “Decree”), similar to the ones granted under other incentives acts that are currently in place in Puerto Rico (i.e. Act 20, 73, 74, etc.).  In this case, the incentives will last for a period of 15 years.

During the term of the Decree, a flat income tax of 20% will be granted to the income generated from an “eligible activity” by an exempt business under the proposed Bill.  Any dividend distributions from the earnings and profits generated from the “eligible activities” will not be subject to taxation or withholding.  Royalties paid by the exempt business in connection to the “eligible activities” will be subject to a 20% withholding when paid to a non-resident party that is not engaged in a trade or business in Puerto Rico.  In addition, a 50% exemption is provided for municipal license taxes and property taxes.  These exemptions may increase to 90% if the Priority Project is for residential units development, as defined in the Bill.  Additional municipal exemptions are provided, such as 100% exemption on municipal construction excise taxes.  Furthermore, the interest income paid by the exempt business in connection with the financing obtained for the “eligible activities” will be totally exempt.

Furthermore, HB 1887 proposes an investment tax credit of up to 15% of the cash invested in the exempt business, which can be subsequently be ceded or sold to a third party.  Moreover, the Bill assigns a priority ranking to these credits, among all other tax credits granted by other incentives acts in Puerto Rico.

To request the preferential tax treatment under the Bill, the Applicant must submit a written proposal to the Committee, who in turn will issue a report designating the proposal as a “Priority Project” or not.  In the event of a favorable designation, the Applicant must then proceed to file an exemption decree application before the Office of Industrial Tax Exemption at the Department for Economic Development and Commerce.

In an effort to equate the local incentives to the ones at the federal tax jurisdiction, the HB 1887 proposes to amend the Puerto Rico Internal Revenue Code of 2011, as amended, to introducing Section 1031.06.  This new section partly mirrors the US Code sections that were enacted to provide for the deferral of taxation of capital gains that are reinvested in the Opportunity Zone Funds.

On this regard, the Bill provides that in the case of capital gains earned in a transaction that does not involve a related party, the taxpayer may elect to defer the taxation of the proceeds of such capital gains that are invested in an Opportunity Zone Fund within 180 days after the date of the sale or exchange.  The requirements and procedures to invest and defer are cross-referenced to the counterpart sections in the US Code.  Similarly, elections for deferral will be allowed up to December 31, 2026.

Importantly enough, Act 22-2012 is also amended to allow new residents with grants under this Act to defer the taxation of the capital gains earned from securities that are attributable to the period of non-residency in Puerto Rico by virtue of the proposed 1031.06 section.

We will continue with our commitment to keep informed in the event that the Bill is signed into Law or if further changes are proposed.  Please contact our Tax Department should you require additional information regarding this or any other tax issue.  We will be glad to assist you. 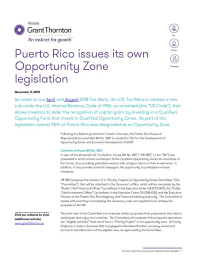