Puerto Rico is prepared to be rehired for manufacturing

For decades Puerto Rico has been known to be a significant player in the global manufacturing sector.  Let’s look at what have been the facts and today’s current scenario.

During mid-August 2020, Puerto Rico received the visit of President Trump administration delegates: Dr. Peter Navarro, an economist and Assistant to the President, Director of the Office of Trade and Manufacturing Policy and Peter Brown, Federal Reconstruction Coordinator and Coast Guard Rear Admiral, currently serving as the Special Representative for Puerto Rico’s Disaster Recovery and other top leaders.  They met with local government and business development representatives to review the island’s potential for the relocation of medical manufacturing plants that are currently located in China and India.

For several decades Puerto Rico has been known to be a significant player in the global pharmaceutical manufacturing sector mostly due to federal tax incentives that favored the development of the manufacturing industry in Puerto Rico.  Those federal incentives date back to 1921 when US corporations and US citizens were exempted from federal taxes provided that they generated at least 80% of their gross income within a United States possession and at least 50% of such income was from an active trade or business conducted therein.

These incentives elapsed in 1996 when section 936 of the US Internal Revenue Code was repealed, although providing a 10-year partial grandfather.  Current global disruptive events, such as the COVID-19 crisis, that has highlighted significant healthcare supply chains issues, and the current tense international environment involving trade laws and tariffs, particularly with China, have made the United States rethink its fiscal position on this regard.

We hereby discuss the two main tax policy trends that are under evaluation.  But first, let us review what happened with Puerto Rico’s manufacturing industry after the termination of the incentives under section 936.

While Puerto Rico has been battling with the rest of the world to maintain and attract new manufacturing investments, other foreign jurisdictions, such as China, Singapore, and Ireland, among others, have emerged into the scenario.  Even when the manufacturing sector in Puerto Rico has been reduced, the truth of the matter is that most of the big players in the global manufacturing sector have continued their presence in the island, although at a much lower capacity as their production is now distributed throughout several foreign countries.

This was the international regime until United States enacted a significant tax reform by the end of 2017, the Tax Cuts and Jobs Act.  New federal tax rules applicable to foreign investments have stirred the international scenario because of their magnitude.  Now, there are new players in the international federal tax law: the so-called GILTI and BEAT.  GILTI (which stands for “global intangible low-taxed income”) created a new complex formula to tax CFCs profits earned in foreign jurisdictions that are highly profitable with low taxation.

A complex formula but with a simple result: CFCs net income over 10% of its net assets is considered ordinary income for the US shareholder.  For its part, BEAT (the acronym for “base erosion anti-abuse tax”) is a new tax to be imposed on United States taxpayers when transacting with related entities in the foreign arena.

Currently, there are several bills introduced in the United States Congress that, if approved, would facilitate a much-needed transition for manufacturing facilities relocating to Puerto Rico.  One proposes the establishment of Economically Distressed Zones, applicable to states as well as to US possessions and providing certain tax credits for wages and activities incurred in these zones.  The second bill proposes, a preferential tax treatment for CFCs operating in US possessions by eliminating the GILTI.

On April 3, 2020, Congresswoman Jennifer González, resident Commissioner for Puerto Rico, introduced Bill HR 6643, the Securing National Supply Chain Act of 2020, to provide various tax credits to Economically Distressed Zones, including a tax credit on the amount of wages paid by an employer to employees in such a zone.  The proposal also establishes a procedure for state and local government, including US possessions, to apply for designation as an Economically Distressed Zones based mostly on the poverty rate of the area.  There would be a 10-year time frame to apply for the designation and, if obtained, the designation would be valid for a 15-year term.  Moreover, the aforementioned credits would be increased if a manufacturing facility is moved to the US (including US possessions) from a foreign country that the US Trade Representative has determined could pose a risk to the national supply chain because of political or social factors.

On May 1, 2020, Congresswoman Stacey E. Plasket, representing the US Virgin Islands, filed Bill HR 6648 - the Territorial Economic Recovery Act, that if becomes law, it will exclude from the GILTI taxation the income earned by “qualified possession corporations” which are those that generate at least 80% of their gross income from sources within the possession and at least 75% of their income is from an active trade or business conducted therein.

A third bill presented on July 9, 2020 by Congresswoman González, HR 7527 – the Medical Manufacturing in Economically Distressed Zones, targets the medical manufacturing facilities engaging in research and development or production of medical products in the Economically Distressed Zones.  The incentives included in this bill are similar to those of Bill HR 6643, that offer tax credits for wages paid and for depreciation and amortization of property used in the medical manufacturing facility.

The two main alternatives currently under evaluation to bring back manufacturing to the United States present different means to achieve the goal.  One of them would protect specifically the corporations operating in US possessions from the anti-deferral impositions of GILTI brought by the US tax reform, while the other would provide a competitive scenario for all areas that may qualify as Economically Distressed Zones in the mainland as well as in the US possessions. 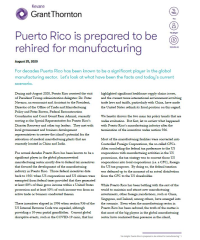