It is no secret that historically Puerto Rico has greatly benefited from that splendid combination of being a US territory with its own fiscal autonomy.  This has allowed the island to deploy a series of tax incentives strategies to provide for economic development.  Evidence of this can be tracked down to the past century when, during the 1940’s, Puerto Rico began transitioning from an agricultural economy to a manufacturing haven for pharmaceuticals and other industrial operations.

Not content to rest on past industrial glories, we have witnessed Puerto Rico’s efforts to expand its fiscal benefits through the enactment of a comprehensive incentive legislation for international insurance and banking services, as well as for the establishment of businesses that wish to export services outside of Puerto Rico under Act 20 and the relocation of high net worth individuals that choose to become residents of Puerto Rico under Act 22.

Take for example Act 20’s quite simple, yet very attractive, offer. By establishing a business unit in Puerto Rico to export a series of pre-determined services activities – that go well beyond the typical “management services” to include international trading, medical tourism and blockchain activities, among many others – to anywhere in the world, including related business in the US, the service provider is afforded a preferential flat income tax rate of 4%, instead of the progressive corporate tax rates that may go up to 37.5%, along with other tax benefits.

Particularly, the positioning of this twosome since 2012 has resulted in a record-setting 2018, where more 1,000 new decrees (i.e. the contract that seals the incentives between the government of Puerto Rico and the individual or business) were issued. Interestingly, this historic growth was despite of the well-known catastrophic passage of hurricanes Irma and Maria during September 2017.

Adding to this incentive-rich environment, in 2017 a new tax reform was approved in the United States, which brought significant changes to domestic federal taxpayers, including some in the international scenario that has been known to be quite controversial.  However, this tax reform brought to the fore a new Opportunity Zones legislation in an effort to allow for private capital injection into distressed areas.  Each state was asked to nominate economically distressed areas, not exceeding 25% of the state’s geographic area, to be classified and certified as an Opportunity Zone.  Even when it is considered a foreign tax jurisdiction for federal tax purposes, the tax reform included Puerto Rico as opportunity zone and waived the aforementioned 25% ceiling, resulting in more than 95% of the whole island being certified as an Opportunity Zone.

These new federal incentives provide for a tax deferral of capital gains that are timely invested in the zone.  Depending on how long such investment is maintained, it may provide for 15% exemption of the amount deferred and a total exemption on the investment appreciation. In a savvy move, Puerto Rico approved a local legislation that mirrors the federal tax incentives for purposes of the Puerto Rican tax jurisdiction.  This allows Puerto Rico residents to participate from the investing opportunities in the island and provides the federal non-resident investor the same incentives they have for US tax purposes.  But Puerto Rico went beyond.  In addition to permitting the combination of the Opportunity Zones with the rest of the Puerto Rico tax incentives such as those offered for manufacturing and tourism businesses, among others, a new tax incentives law was approved for projects funded, even partially, from capital gains deferred under the Opportunity Zones regime, that engage in activities that were not previously merited by other tax incentives in Puerto Rico but are considered to be transformational in terms of economic and social impact for the communities in Puerto Rico.  These new incentives include a 18.5% flat tax on their operating income, a tax lower than the new attractive US corporate tax rate of 21%, and an investment tax credit that may range from 5% to 25% of the amount invested, this on top of the already available incentives that the Opportunity Zones provide for Puerto Rico and federal tax purposes.

Certainly, the current scenario for business development in Puerto Rico is being presented with an unparallel opportunity to finally end a grueling 13-year economic recession. 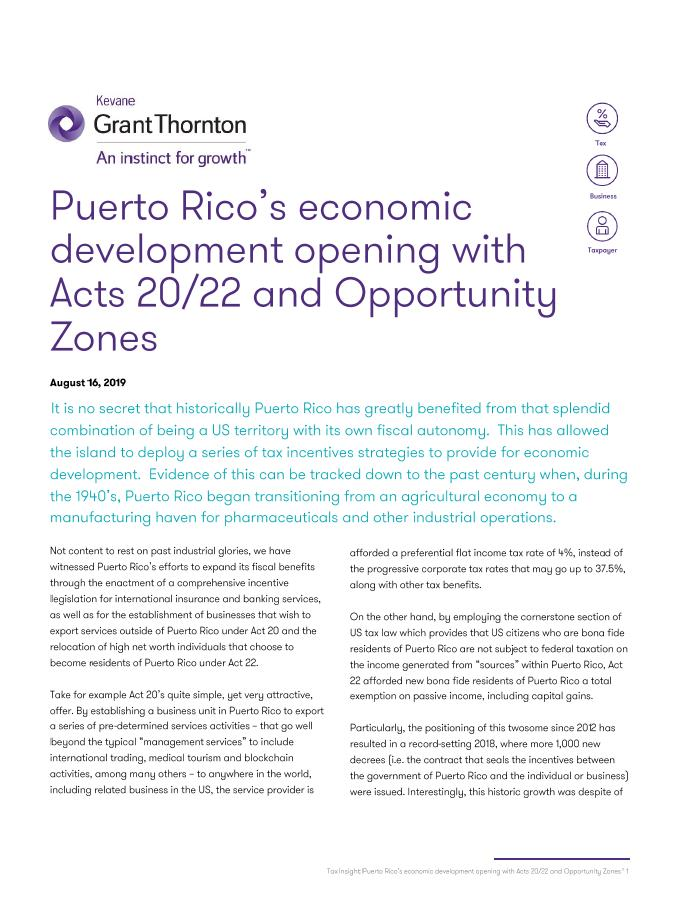