One of the first activities to be performed is to identify and create an accurate inventory of all leases. As defined by ASC 842-10-15-3, a contract is or contains a lease if the contract conveys the right to control the use of identified property, plant or equipment (an identified asset) for a period of time in exchange for consideration.

To determine if the contract conveys the right of use, the customer needs to have both of the following:

To determine whether there is an identified asset it should be considered the following:

Lessees are the most significantly affected by the new leasing standard.  ASC 842 retains the two-model approach of classifying leases as operating or finance, however most leases will now be recorded on the balance sheet. When a lease is recorded, a liability must be recognized based on the present value of future lease payments, with an offsetting entry to recognize a right-of-use payment. While both operating and finance leases will be recorded on the balance sheet, the expense recognition pattern differs. Operating leases require lease expense to be recognized on a straight-line basis over the lease term, while finance leases require the lessee to recognize interest expense and amortization expense.

Lessors will also see an effect on their financial statements and disclosures.  The profit recognition requirements under lessor model match those under the new revenue recognition requirements, issued by the FASB.  The lessor is required to classify a lease as a sales-type lease, direct financing lease, or operating lease based on ASC 842 new classification criteria.

Upon adoption of the lease standard it is required to apply a modified retrospective transition approach.  The lessors and lessees can choose to:

ASC 842 provides various optional transition practical expedients that must be elected as a package and applied consistently by an entity to all its leases that commenced before the effective date.  An entity need not reassess:

Another practical expedient consists in the election to use hindsight during the transition period. This election allows an entity to use its current knowledge or current expectations as of the effective date, instead of its knowledge and expectations as of the latest assessment date under legacy GAAP, when determining the lease term and assessing whether impairment of the right-of-use asset exists during the transition period.

The Board issued an update to ASC 842 whereby there is an optional transition practical expedient to not evaluate under ASC 842 existing or expired land easements that were not previously accounted for as leases under ASC 840.

Implementing the new lease standard will require a new perspective on Company’s current accounting lease contracts and processes.  A seamless transition and implementation of the ASC 842 accounting guidance will require deep technical accounting skills, the use of updated technology and a comprehensive understanding of the potential impacts to the financial statements. 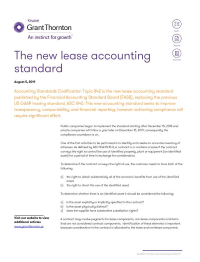