Incentives for agricultural, film, young entrepreneurs, and other industries

To continue our tax incentives series and keep you informed of the most important changes to the incentives in Puerto Rico, we turn our attention to the following incentives:

Tax Incentives for the Film Industry of Puerto Rico

In connection to the incentives applicable to young entrepreneurs, the Act provides that they shall request a grant of tax exemption with the Department of Economic Development and Commerce as opposed to the Puerto Rico Trade and Export Company (previously Act 135-2014).

The Act adopts the provisions related to business incubators (created originally by Act 95-2013). The DEDC will explore ways to stimulate the expansion of business incubators in Puerto Rico by adopting the incentives set forth in the Act to strengthen entrepreneurship and seek the necessary training for the creation of sustainable businesses that generate new jobs. The funds provided for these benefits will come from the Economic Incentives Fund.

Incentives applicable to public carriers of air transport services shall be requested through a tax exemption grant with the DEDC.

The Act is mainly effective from July 1, 2019. Changes incorporated by the Act will not affect current grantee holders. Applicants may elect to file under previous laws or under the Act until December 31, 2019. Commencing on January 1, 2020, all applications will have to be submitted under the Act. However, the Secretary of the DEDC may implement by regulation provisions of the Act before January 1, 2020 to further the objectives of the Act. 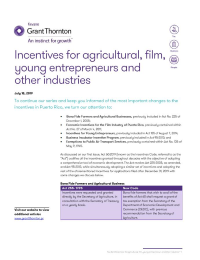