If the proposed Tax Reform (H.R. 1544) is passed as presented to the Puerto Rico Legislature on April 16, 2018, the 2011 Puerto Rico Internal Revenue Code, as amended (PR Code) will suffer significant changes.  The following are among the proposed changes that affect corporations: 1) a reduction in tax rates, 2) various changes to the alternative minimum tax, 3) limitation on certain deductions.  We want to highlight one particular proposal, which would have a positive impact on most corporations that have transactions with related entities outside Puerto Rico.

The PR Code establishes a 51% limitation on the amount of deductions that an entity can take for expenses paid to related entities outside PR or on allocations of expenses made to the PR entity.  This disallowance has been subject of debate since it was established in 2013.  The most renowned public debate on the subject came as a result of the case Wal-Mart Puerto Rico, Inc. V. Juan C. Zaragoza Gómez, Civil No. 3: 15-cv-03018(JAF).  However, in this case the Court ruled only on the alternative minimum tax impact related to these expenses.  The disallowance of the deductions was not specifically addressed.  Subsequently, the PR Treasury Department issued Administrative Determination 16-11, confirming that the disallowance was still in effect.

The proposed tax reform maintains the 51% disallowance as it is now, but with one important exception.  The exception provides that an entity that has made a transfer pricing study to support the charges from related entities will not be subject to the 51% disallowance.  It also establishes that the rules to be followed for the transfer pricing study will be those presented on Section 482 of the United States Internal Revenue Code of 1986, as amended and its regulations.

What can you do to be prepared?

First, determine if your company has been affected by the 51% disallowance in prior years’ tax returns.  Second, stay tuned to the final language that will be approved by the Legislature (this should be final on or before June 30 unless the project is moved to an extraordinary session in July).  Third, you need to start working on a transfer pricing study to cover your intercompany charges for 2018.

Affected companies should prepare a preliminary transfer pricing study before year end so that they can make any necessary adjustments on the intercompany charges and then complete the study with actual yearend information.

We will keep you informed about the status of this legislation. Please contact us to discuss your particular case. 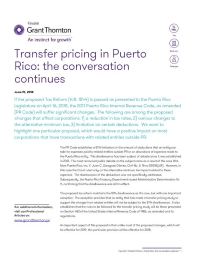