As noted on our October 10, 2017 Tax Alert, the Disaster Tax Relief and Airport and Airway Extension Act of 2017 (the “Act”) allows relief measures for zones and areas that were affected by Hurricanes Harvey, Irma and Maria.  Of particular interest was the concession of a business tax credit to employers for employee retention on disaster areas under the U.S. Internal Revenue Code of 1986, as amended (the “IRC”).

Pursuant to Section 503 of the Act, an eligible employer affected by any of the aforementioned hurricanes may claim an employee-retention tax credit under Section 38 of the IRC equal to forty percent (40%) of the qualified wages of each eligible employee.

The Act makes the credit extensive to Puerto Rico, which will be paid in an amount that equals the aggregate benefits that would have been provided to the resident of Puerto Rico if a mirror code tax system had been in effect.  Nonetheless, the payment would be subject to the Puerto Rico government having a U.S. Treasury-approved plan under which the former would promptly distribute the aforementioned payments to its residents.

On May 18, 2018, the Puerto Rico Treasury Department revealed the requirements and procedures that will established locally for an eligible employer to request the tax benefit.

Who is an Eligible Employer?

An Eligible Employer inscludes an individual, corporation or pass-though entity:

To be able to claim the credit the employer must have also timely filed, through electronic means, the following returns:

Moreover, the employer must be duly registered in the PRTD’s Merchants’ Registry.

According to the PRTD, the concession of the credit will neither affect the employer’s ability to claim the customary deductions for salaries paid nor will it be considered taxable income.

Who is an Eligible Employee?

The PRTD has defined an Eligible Employee as:

Individuals hired after these dates, as well as family members employed by a sole proprietorship or the majority owner (i.e. 51% or more of the proprietary interest) of a corporation or partnership, will not qualify as eligible employees.

What are Qualified Wages?

Qualified Wages are those that are paid or incurred by an eligible employer to an eligible employee on any day after September 16, 2017 (or September 4, in the case of hurricane Irma) and before January 1, 2018, beginning on the date on which the trade or business was rendered inoperable at the principal place of operations and ending on the date on which significant operations were resumed at said place.

For purposes of this benefit, the term “wages” comprises salaries paid or incurred that were subject to unemployment taxes, and includes commissions, bonuses, vacation and illness time, as well as other work-related remunerations.

When can a business be considered inoperable?

A business will be considered inoperable if one or more of the following were present:

At what time are significant operations resumed?

This is a facts-and-circumstances determination that must be done in good faith by the employer considering whether the operations were unstable or had been curtailed due to the lack of utilities and telecommunications services.  Operations need not be at the same level that they were prior to the hurricane to be considered them as significantly resumed.

The determination on whether significant operations have resumed must be done separately for each affected location.

What is the amount of the credit and how can it be claimed?

As noted above, at the federal level, an eligible employer may claim a tax credit equal to 40% of the qualified wages (up to $6,000) of each eligible employee.  Nonetheless, for Puerto Rico purposes there is not set percentage.  Consequently, the local government is in active negotiations with its federal counterpart to arrive at the applicable tax credit percentage.

The PRTD has established that the credit can only be requested though electronic means, through the employers’ platform for the filing quarterly return of income tax withheld (Form 499 R-1B), until November 30, 2018.  Nevertheless, it is not available to be used yet.  The PRTD will soon announce the starting date for processing.

At Kevane we are ready and available to assist you and your business with any of the determinations and documentation needed to claim these benefits.  Please contact María de los A. Rivera, Francisco Luis, Isabel Hernández or Lina Morales for assistance. 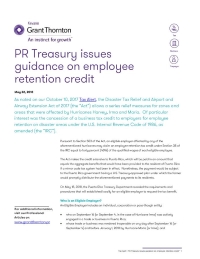