Telemedicine and export incentives in times of COVID-19

In this new era, in which we are currently living due to the COVID-19 pandemic, social distancing is the new normal. This has forced a rapid growth of the telemedicine as a resource not only to serve our population, but also as a safety measure for our beloved physicians.

The states in the mainland and Puerto Rico have rapidly adopted emergency and immediate guidelines to permit and provide flexible rules to allow a broader reach of the so much needed medical advice by permitting the telemedicine. Curiously, our Puerto Rico Incentives Code had already a platform of tax incentives ready to assist as an economic tool in this regard.

Incentives for exportation of services

What are the incentives that the Puerto Rico Incentives Code offers for the exportation of services?  One of the incentives offered is that the net income derived from the exportation of services is subject to a flat income tax rate of 4%, meaning that there is no additional tax on distributions. In addition, the Puerto Rico Incentives Code provides a 75% exemption for property taxes and 50% exemption from municipal taxes.

To be eligible for such incentives, the taxpayer must solicit be covered under a decree, which is a contract between the recipient of the incentives and the government of Puerto Rico, represented by the Secretary of the Department of Economic Development and Commerce. Under this incentive the term of such decree is for 15 years and provides the option to a renewal for an additional 15 years.

The main requirement to obtain a tax incentives decree for exportation of services is that such services should be for an outside maker, meaning that the recipient of the service must not be in Puerto Rico. The ideal scenario is that those services be performed entirely in Puerto Rico to avoid possible taxation in the foreign jurisdiction where the services are being exported. Therefore, physicians in Puerto Rico could assist outside markets such as the United States health centers by engaging in telemedicine services from Puerto Rico. It is important to bear in mind that the decree should be requested in advance and prior to engaging in the export activities.

It is not a secret that Puerto Rico was very proactive in setting up an early and timely lockdown that has proven to be effective in controlling the effects of the pandemic in our island.  As a result, we now have a great opportunity to assist the mainland and for which the Puerto Rico Incentives Code provides an excellent tool to achieve this.

We will continue with our commitment to keep you up to date with these tax-related developments.  Please contact our Tax Department should you require additional information regarding this or any other tax issue.  We will be glad to assist you. 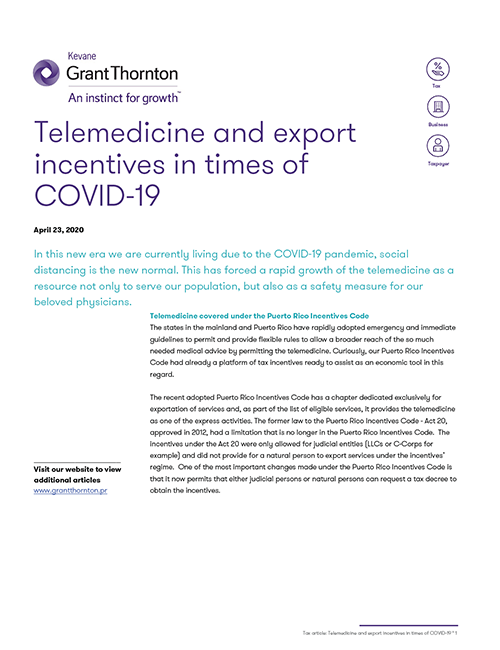