Note: All legal references are to applicable sections of the United States Internal Revenue Code of 1986 and the regulations issued thereunder, unless expressly stated otherwise.
Contents

One of the appealing aspects of becoming a bona fide resident of Puerto Rico (“BFR-PR”) from a tax perspective lies in the United States federal tax treatment of certain items of income derived by Puerto Rico residents. This article focuses on the federal income tax implications of certain capital gains derived by a new BFR-PR that previously resided in the United States. As a general rule, capital gains on the sale or exchange of personal property by a BFR-PR are excluded from US income tax under §933 and §865(a).  However, special rules apply to gains resulting from the sale of certain property owned by the individual before establishing Puerto Rico residency (“Previously Owned Property”) and sold within 10 years of the move. Any individual that falls within the scope of these rules should understand its tax impact and prepare to report gains derived from transactions of Previously Owned Property in the corresponding income tax return.

This reading does not pretend to offer an extensive discussion of all questions that may arise in connection to Previously Owned Property and a new BFR-PR. Instead, our intention is to provide some basic guidance on the federal tax implications that the sale of Previously Owned Property may trigger to some BFR-PR and provide a general overview of the interplay of these rules with virtual currencies. In summary:

I. Sale or exchange of Property

A special rule arises under Regs. §1.937-2(f) on gains on certain investment property owned by a United States citizen or resident prior to becoming a bona fide resident of a possession (“Special Sourcing Rule”).  For purposes of this discussion, we will refer to Puerto Rico, but note that this special rule applies to other US possessions as well. The rules aim to impose United States federal income tax on gains accrued on certain property while the individual was a United States resident. Under the Special Sourcing Rule, gains from the disposition of certain property sold by a resident Puerto Rico will not be treated as income sourced to Puerto Rico and will instead be considered from sources within the United States.

The Special Sourcing Rule is applicable to an individual that meets the following conditions:

ii. for the tax year in question, he/she was a bona fide resident of Puerto Rico;

iii. had a gain from certain property defined below; and

Iv. for any of the 10 years preceding that year, he/she was a citizen or resident of the United States (other than a bona fide resident of Puerto Rico).

Furthermore, the Special Sourcing Rule applies to the following property:

ii. the property is of a kind described in §731(c)(3)(C)(i) or §954(c)(1)(B), including stock in a corporation, interest in a partnership, interests in or derivative financial instruments - including options, forward or futures contracts, short positions, and similar financial instruments - in certain assets or in any commodity traded on or subject to the rules of a board of trade or commodity exchange; and

iii. the property was owned by the individual before such individual became a bona fide resident of Puerto Rico.

The BFR-PR may elect to treat a portion of the gain within Puerto Rico (“Pro-Rata Election”) according to the individual’s possession holding period, as discussed below. As a result, a portion of the gain will be considered as United States source income, subject to federal income taxation, and the other portion will be considered income from Puerto Rico sources and excluded from federal income taxation.

If a BFR-PR makes the Pro Rata Election, he/she must determine the possession holding period. This will set the cutoff date that will be used to apportion the amount of the gain that will be deemed United States source versus non-United States source. Pursuant to the §1.937-2 Regulations, the possession holding period will be on the first day during such period that the individual does not have a tax home outside the relevant possession. In general terms, §1.937-1 Regulations describe an individual's tax home as the location of the individual's regular or principal place of business. If individual is not engaged in carrying on any trade or business or has multiple businesses, then the individual's tax home is where he or she regularly lives.

Please note that the tax home test is only one of three tests that an individual must meet to be considered as a bona Fide resident of a possession, which requires a separate analysis.

Once the cutoff date is determined, the individual must also determine how to allocate the gain between United States and Puerto Rico sources. There are two methods to calculate the gain attributed to the possession holding period, one for marketable securities and another for other property not classified as a marketable security.

Pursuant to the §1.937-2(f)(1)(vi)(A) Regulation, marketable property must be actively traded within the means of an established financial market. In the case of marketable securities, the portion of gain attributable to the possession holding period will be determined by reference to the fair market value of the marketable security at the close of the market on the first day of the individual's possession holding period, that is, the first day in which the individual’s tax home is in the possession.

Absent an election under the Special Sourcing Rule, all of Resident A’s gain ($150) will be treated as income from sources within the United States. However, pursuant to the Special Source Rule, Resident A may elect on his 2019 income tax return filed with Puerto Rico to treat the portion of this gain attributable to his possession holding period with respect to Puerto Rico as gain from sources within Puerto Rico. If the election is made, the $50 difference between the price at the first day of his possession holding period and the sale date is considered as possession sourced income and exempt from federal income taxation pursuant to §933. The rules for the Puerto Rico taxation of the gain depends upon whether the individual holds a grant of tax exemption for individual investors.

For property other than marketable securities, an allocation will be made in proportion to the number of days in the possession holding period, using the following formula:

Using the example above, Resident A had his investment for 1,096 days. This possession holding period lasted 672 days, since it began on March 1, 2019 and ended on December 31, 2020. Resident A may elect to treat 61.31% of the total gain of $150 as Puerto Rico source income, that is $92; and an amount equal to $58 as United States source income and subject to US federal taxation.

The discussion above leaves us with several question: Is cryptocurrency considered property under Regs. §1.937–2(f) for which the Special Sourcing Rule applies? The answer to this question should be analyzed on a case-by-case basis because of the great number of virtual currencies currently traded and the different attributes each of these currencies have in the hands of the taxpayer. Note that the Commodity Futures Trading Commission has expressed that virtual currencies are commodities under the authority of the Commodity Exchange Act. To the extent a virtual currency is treated as a commodity for federal income tax purposes, or any other property described in Regs. §1.937–2(f), said currency will be considered within the scope of property subject to the Special Sourcing Rule. The next determination should then be how to allocate the gain attributed to the possession holding period, whether under the marketable or non-marketable security provisions explained above, a determination that will also vary on a case by case basis, as not all cryptocurrency may be considered as marketable.

Certain individuals who move to Puerto Rico also choose to request an Individual resident investors’ Puerto Rico tax incentives grant (formerly Act 22-2012 and currently Act 60-2019). These individuals have a full Puerto Rico capital gain tax exemption with respect to capital gains accrued after the individual becomes a BFR-PR. Gains accrued before the move are subject to taxation in Puerto Rico at tax rates that depend on the timing of the transaction. It is important to clarify that the effective date of such grants must not be confused with the date used to determine the possession holding period under the rules discussed above. 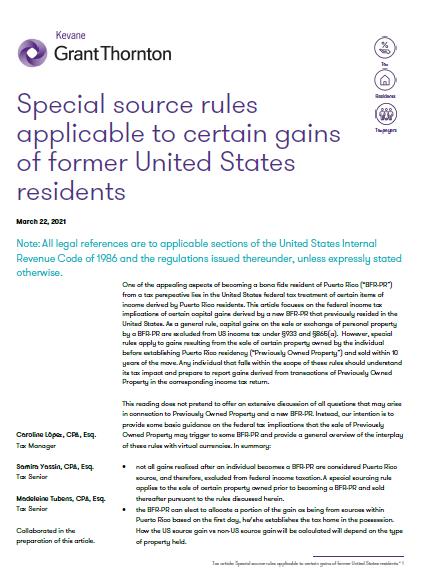