After the recent earthquakes that have hit Puerto Rico, the United States President Donald J. Trump declared Puerto Rico a major disaster zone in six municipalities, and now the Puerto Rico government is seeking into the designation of 10 additional municipalities. Also, Secretary of HUD Ben Carson finally appointed a monitor to oversee the administration of disaster relief allocated to Puerto Rico, which seemed to be the last piece of the puzzle to start the distribution of CDBG-DR funds into Puerto Rico.

While these matters are still under development, we aim to keep you informed of the events’ impact on the tax planning, compliance and projects in Puerto Rico.

Since the last days of 2019, Puerto Rico has been shaken by a swarm of earthquakes which have caused significant damages, particularly in the southern coast. As a result of the damages caused by these earthquakes to the island, on January 7, 2020, the Governor of Puerto Rico issued Executive Order number OE2020-01 to declare a state of emergency in Puerto Rico. On January 16, 2020, President Donald J. Trump declared Puerto Rico a major disaster zone and ordered federal assistance for the areas affected by the earthquakes. In particular, the President will make federal funds available for temporary housing, home repairs, and low-cost loans to cover uninsured property losses to help individuals and businesses in the municipalities of Guánica, Guayanilla, Peñuelas, Ponce, San Germán, and Yauco. Also, federal funding will be available for eligible local governments and certain private nonprofit organizations on a cost-sharing basis for emergency work in the former municipalities.

For these emergency situations, the 2011 Puerto Rico Internal Revenue Code, as amended, (hereinafter referred to as the “PRIRC”) provides a set of rules that may result in tax relief for 2020, including:

In the aftermath of recent earthquakes, individuals and businesses in Puerto Rico have suffered losses. Beware that amid the damage mitigation following these seismic events, it is important to be mindful of gathering and documenting all relevant information in order to claim applicable losses in your 2020 income tax return. In the table shown below, a summary of the applicable tax treatment for each type of property is provided:

PRIRC Sections 1081.01(b)(1)(D) and 1081.02(d)(1)(I), respectively, confer power to the Secretary of the PRDT to issue the corresponding guidelines to allow individuals to withdraw their retirement account savings and individual account retirement funds penalty-free, subject to certain limitations, to cover eligible expenses under a disaster declared by the Governor of Puerto Rico. On January 10, 2020, the Puerto Rico House of Representatives issued Joint Resolution 582 to reaffirm the former rule of law. At the moment, the PRDT has not issued an official pronouncement to provide relief under these provisions.

In order to be deductible for income tax return purposes, donations made must meet several requirements. First, payments must be made to qualified organizations duly registered with the Secretary of the PRDT. Second, income tax deductions limitations per taxpayer must be considered. Such limitations are summarized in the table below:

Just a quick reminder that according to the Internal Revenue Circular Letter No. 20-02 issued by the PRDT, tax due dates for income tax returns and extensions due on January 2020 were postponed until March 16, 2020. For more details, refer to our Tax Alert released on January 17, 2020.

The PRDT issued Administrative Determination 20-01 to provide a temporary sale and use tax exemption until January 31, for the following items: “carbonated drinks”, “confectionary products” and “candies” as defined under Section 4010.01 of the PRIRC. As a result of the temporary sales and use tax exemption granted to individuals, merchants that paid sales and use tax when buying these items may experience a slight delay in being able to benefit from the tax credit generated by such acquisitions. The delay is caused by a taxable timing difference, as merchants paid sales and use tax and had to sell them to individuals exempt from sales and use tax. For more information on this matter, refer to our Tax Alert released on January 9, 2020.

According to the U.S. Department of Housing and Urban Development (hereinafter referred to as “HUD”) Press Release No. 20-008, on January 16, 2020 HUD appointed Secretary Robert M. Couch as the Federal Financial Monitor of the $20.5 billion CDBG funds assigned to Puerto Rico. Secretary Carson informed Jennifer González, Resident Commissioner of Puerto Rico, that the $8.221 billion CDBG funds authorized for reimbursement 11 months ago should be disbursed in a near future. On January 15, 2020, Jennifer González announced the publication of guidelines to access the $8.285 billion CDBG funds assigned for disaster mitigation.

We will continue with our commitment to keep you up to date with these tax-related developments.  Please contact our Tax Department should you require additional information regarding this or any other tax issue.  We will be glad to assist you. 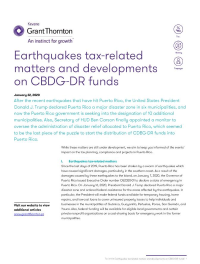