Besides the already-approved Tax Reform, no other legislation has generated more interest and anticipation than the much-touted consolidation of all of Puerto Rico fiscal benefits into a single, comprehensive and coherent Tax Incentives Code.

Citing “minimal accountability and visibility on how incentives and grants are issued”, as well as the government’s fiscal restraints to withstand the current fiscal crisis, House Bill No. 1635 and Senate Bill No. 1013 (collectively, the “ proposed Incentives Code”) aim to overhaul the rules and procedures for the review, approval and assessment of tax incentives, by encouraging activities that result in a positive return on investment for Puerto Rico.

Moreover, by foregoing convoluted request procedures in favor of simpler and more effective processes, the proposed Incentives Code seeks to redirect the government efforts to compliance, measurement and accountability. According to the Puerto Rico Department of Economic Development and Commerce, the guiding principles for the granting of tax incentives will be:

Though the House and Senate bills were filed late May 2018, for immediate consideration, their approval took a backseat to the aforesaid Tax Reform and the ongoing negotiations with the Fiscal Oversight Board. Now, with the Tax Reform in place, the Legislature is keen in approving the Incentives Code before the end of the term – meaning within the first trimester of 2019. As such, we will apprise you of its development. 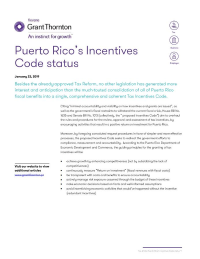