Sales and use tax: past, present, & future of internet sales

Puerto Rico has joined several states in trying to tax (directly or indirectly) internet sales. If you do not have physical presence in Puerto Rico and are currently making, or planning on making, sales of personal property, which will be mailed to Puerto Rico, you may be interested in the following the series.  If you are a Puerto Rico resident and you buy from internet suppliers, this may also be of interest to you.

The United States Supreme Court decided in Quill v. North Dakota, 504 U.S. 298 (1992), that the lack of physical presence on remote sales exempts a seller from the obligation of collecting and remitting the sales and use tax (“SUT”) to any state.  Back then, the states collected the sales tax from retailers that had a physical presence in their territory.

Nowadays, with the increase and proliferation of online sales by remote sellers, states have struggled through many years to be able to collect tax from sellers located outside the state.

Act 25 of 2017 created a new category of merchants known as Non-Withholding Agent (“NWA”) with the purpose of comprising merchants whose only contact with Puerto Rico is that the buyer is a resident of Puerto Rico or a person carrying on a trade or business in Puerto Rico.  As defined in the Act, a NWA is not required to collect the SUT, instead it is required to inform their buyers of their obligation to pay use tax on the imported items.  This is performed in writing through a note in every invoice or receipt.

On the other hand, an NWA can voluntary request to be treated as a withholding agent (subject to the collection of SUT and to the filing of SUT Monthly Returns), and be excluded from the aforementioned reporting requirements.

As a result of the impact of Hurricanes Irma and María through the Island, residents increased their online purchases due to the temporary interruption of electricity and communications, and consequently the closing of businesses.  The demand was so high that items that usually had previously arrived in two days took weeks to arrive. The money spent on online purchases could have been spent locally helping with the recovery of the economy, but unfortunately, Mother Nature played us a bad move.

The PRTD realized the financial impact online purchases were having in the Island, and rapidly implemented an exemption period from November 20, 2017 through December 31, 2017 that allowed certain local merchants to be exempt from collecting the SUT in their sales. With this exemption, the PRTD tried to boost the local commerce.

The United States Supreme Court granted certiorari in the case South Dakota v. Wayfair, 17-494 on whether remote sellers can be required to collect and remit SUT in a state even though such seller does not have physical presence.

The final decision could end the debate over how to apply sales taxes to online sales. Even more important, it could reverse the verdict in Quill v. North Dakota. The wait for many states is soon to be over as they are more than ready to start collecting sales tax on online sales.

Earlier in 2018, the PRTD was able to “pull out an ace under its sleeve” by announcing that it had reached an agreement with one of the main internet sales companies to collect the SUT from its customers. The agreement contained confidentiality clauses that prevented the disclosure of the company’s name. Nevertheless, on March 16, they announced that Amazon had agreed to start collecting the SUT on its sales to Puerto Rico commencing on April 1, 2018.

Nevertheless, and not withstanding more internet sellers join Amazon in collecting SUT, merchants and non-merchants are required by law to file a Declaration of Imports and pay use tax on personal property imported into Puerto Rico. Usually, non-merchants believe that this requirement applies only to merchants and forget that the Internal Revenue Unified System (“SURI” for its Spanish acronym) provides the option for non-merchants to pay the corresponding use tax. The PRTD realizes that compliance on the part of the consumer is low and will require great effort to increase; therefore, they concentrate in getting these agreements and collaborations with online sellers.

While we await for the decision of the Supreme Court (hearings are scheduled for April) we foresee more of these collaboration agreements to follow, especially after the highly publicized economic impact of last year’s storms. Corporations that want to be “good corporate citizens” may join in the effort to provide government with resources to reconstruct the island. 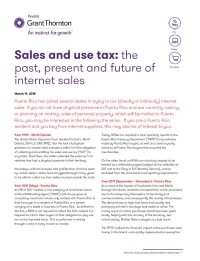