People who moved from P.R. in ’17, what about their taxes?

Moving to another country and starting over is one of the most frightening yet exhilarating adventures ever. Life as you know it will change and we are not just talking about addresses and new neighbors.

Consequently, proper planning should be done before hand, so no surprises come up later. Herein I will be addressing a statement that all individuals shall file at the Internal Revenues Service (IRS) whenever moving from/to Puerto Rico.

As you are aware or may have heard, Puerto Rico is a possession of the U.S. since 1898. Subsequently the U.S., in 1917, granted U.S. citizenship to the inhabitants of Puerto Rico. As part of this political relationship, the U.S. government can implement laws for the U.S. territories, different to those for states.

One of such laws was enacted through section 937 and Treasury Regulation 1.937-(h) of the U.S. Internal Revenue Code, requiring individuals to notify the IRS that they became or ceased to be a bona fide resident of a U.S. possession using Form 8898, titled “Statement for Individuals Who Begin or End Bona Fide Residency in a U.S. Possession.”

Generally, individuals who are U.S. citizens, who were bona fide residents of a possession for the last two taxable years immediately before the tax year of moving and have worldwide gross income of more than $75,000, must file Form 8898. For married individuals, the $75,000 filing threshold applies to each spouse separately.

It is important that you discuss with your tax advisor, the rules of bona fide residency, which entails the tax home test, closer connection test and the presence test. For further guidance with the bona fide residency rules, please refer to Publication 570 Tax Guide for Individuals with Income from U.S. Possessions at the IRS. 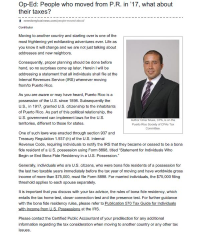 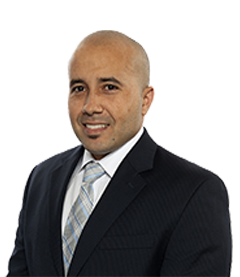