If one were to find a common thread throughout the various pronouncements that the Puerto Rico Treasury Department has issued in the aftermath of Hurricane Maria, it would be that this momentous event has brought upon a series of economic challenges which have required the current administration to balance societal needs vs. its fiscal responsibilities in a most pressing manner.

In keeping with said objective, the Puerto Rico Treasury Department (the “PRTD”) issued on November 15, 2017 Administrative Determination No 17-29 (“AD 17-29”) to allow eligible Retirement Plan and IRA distributions and provide a preferential tax treatment, subject to the applicable withholding rules and the administrative procedures instituted as part of AD 17-29.2680.1 (Corporations, LLC’s and Partnerships) (collectively, the “waiver request”).  The question is: who or what will be considered a new business?

According to Section 1081.01(d)(2)(B)(vi) of the Puerto Rico Internal Revenue of 2011, as amended (“The Code”), amounts accrued on a duly-qualified Retirement plan can be distributed to its participants or other beneficiaries in the event of an extreme economic emergency (“hardship”).

Executive Orders OE-2017-47 and -56 allow the Secretary of the Treasury (the “Secretary”) to determine under which circumstances will the provisions of Section 1081.01(d)(2)(B)(vi) be activated.  Moreover, Executive Order OE-2017-67 determines that Retirement plan and IRA account distributions made during the declared state of emergency will be considered as distribution made during an extreme economic emergency.

What are eligible distributions?

Pursuant to AD 17-29, payments or distributions made in cash from a retirement plan or an IRA during the established eligible period, that were requested by an eligible individual to cover eligible expenses, will be considered eligible distributions.

Also, AD 17-29 allows the eligible individual to receive the eligible distributions without him/her being subject to any restricted period regarding their contributions to the retirement plan or IRA.

How will eligible distributions be taxed?

Since Eligible Distributions will be treated as distributions under extreme economic emergency, they will be taxed in the following manner:

The eligible individual can make eligible distributions from various retirement plans and IRA, but the aggregate of these can neither exceed the $10,000 as the exempt amount, nor the $100,000 threshold imposed by AD 17-29.

It is a sine qua non requirement that the above referenced 10% be withheld at the source, and be remitted to the PRTD no later than the fifteenth (15th) day of the month after the distribution date.  Therefore, the employer, plan administrator or trust service provider that disburses the eligible distribution will be considered as a withholding agent.  Failure to act as such will render it liable to the Secretary for the unpaid amount.

If the withholding is not made, the distribution will be subject to regular taxes as ordinary income to the individual.

How can an individual request the eligible distribution treatment?

The eligible individual must file a sworn statement before the administrator or financial institution with following information:

AD 17-29 states that, in the case of retirement plans, the application of its dispositions is optional.

Thus, employers with Puerto Rico retirement plans can, but are not bound to, adopt all of AD 17-29 dispositions or just some.

If the retirement plan decides to follow and include all or parts of AD 17-29, the plan must be amended no later than December 31, 2018.  However, since the proposed amendment is not one that affect its qualification for tax purposes (pursuant to Tax Policy Circular Letter No. 16-08), no filing before the PRTD is necessary.

Note: As highlighted in our Tax Alert dated July 1, 2016, the Puerto Rico Oversight, Management, and Economic Stability Act (PROMESA), seeks to provide Puerto Rico with fiscal and economic discipline through the creation of a control board, among other things. Virtually every fiscal decision by the Government of Puerto Rico will be made or approved by the Oversight Board created by PROMESA. On this regard, the board has authority to prevent the execution or enforcement of a contract, rule, executive order or regulation to the extent that it is inconsistent with the approved fiscal plan. 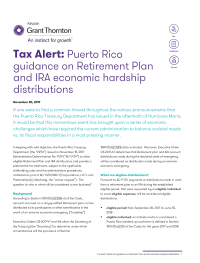