Accounting and disclosure considerations of Hurricanes Irma and Maria

After the passing of Hurricanes Irma and María over Puerto Rico, many companies have suffered damages to their property and, in other cases, they have experienced business interruptions for some time. Most of those companies have insurance policies covering damages to property and interruptions caused by these natural disasters. Accounting for insurance recoveries depends in the nature of the claim.

What is business interruption insurance?

Insurance that provides coverage if business operations are suspended due to the loss of use of property and equipment resulting from a covered cause of loss. Business interruption insurance coverage generally provides for reimbursement of certain costs and losses incurred during the reasonable period required to rebuild, repair, or replace the damaged property. This type of insurance is designed to protect prospective earnings of the insured company.

The types of costs and losses covered by business interruption insurance typically include the following:

The recovery of lost revenue or profits is to be recognized only when the contingency has been resolved and using a gain contingency model. Various factors should be evaluated when considering if a gain can be recognized such as if a signed agreement exists or if the insurance company acknowledges they will cover such losses.

On the other hand, a loss contingency should be recorded when an event occurs and the loss associated with such event is probable and reasonably estimable.

Property damaged by a natural disaster and that was not fully depreciated will most likely result in a loss for the entity. Some considerations to take into consideration when evaluating and recording the loss for property damage includes the asset’s salvage or resale value. Such evaluation should be made following the guidance in ASC 360, Property and Equipment for computing impairment losses. The effects of a natural disaster might be a triggering event that indicates potential impairment, and, as a result, impairment evaluations and the related impairment testing might be required.  If recovery for property loss is expected, a receivable should be recorded for the amount expected to be recovered and not to exceed the loss recorded.

If a nonmonetary asset is damaged or destroyed in one accounting period and recovery is made in a subsequent accounting period, the gain or loss shall be recognized in accordance with ASC 450.

The entity should remove from books the value of the damaged asset and record the insurance proceeds. In the case no loss recovery from insurance is made, the asset will be write-off and its entire value will be recorded as a loss. On the other hand, if full recovery is made from the insurance, the entity should record the total proceeds received and the total loss. An entry will be recorded to remove the asset from books and record the loss and another entry will be made to record proceeds received and eliminate loss recorded.

In the case the insurance does not fully cover the loss, the entity will record the write-off of the asset, the proceeds received from insurance and a gain or loss depending if the amount received is higher or lesser than the loss recorded.

An entity can decide how to classify recoveries of business interruption insurance in the income statement, provided that the classification complies with US GAAP.

Disclosures in the financial statements may be necessary for losses incurred, insurance claims made and expected insurance recoveries.

Specifically, for business interruptions, the following information shall be disclosed in the notes to the financial statements in the period(s) in which insurance recoveries are recognized:

the nature of the event resulting in business interruption losses

the aggregate amount of business interruption insurance recoveries recognized during the period and the line item(s) in the statement of operations in which those recoveries are classified.

Insurance claim services
Grant Thornton member firms have deep expertise in many industries, as well as significant experience with claims resulting from hurricanes, floods, fires, explosions, and other insured events. Our professionals have worked for insurance carriers, brokers and carrier accounting firms, and can anticipate potential claim pitfalls at the outset of the process.
Read more here Kevane Grant Thornton | Insurance Claim Services 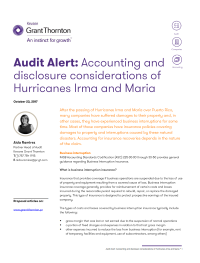