During the past decades, technology has revolutionized all aspects of human life, including how business is done.  As a result, the virtual currency industry has emerged in such a way that it may also be used to pay for goods or services due to its function as a medium of exchange.

Some governments around the world have adopted policies and rules involving virtual currency investors, and Puerto Rico and the United States are not the exception.

During 2012, Puerto Rico enacted legislation addressing the creation of new tax incentives focused on the exportation of services (Act 20) and the promotion of the relocation of individual investors to Puerto Rico (Act 22).

Specifically, Act 22 seeks to provide incentives to individuals that comply with certain requirements and become residents of Puerto Rico prior to December 31, 2035. Act 22 provides the following incentives:

Special attention has been provided to the capital gains special tax rate because capital gains from the sale of personal property are sourced to the seller’s residence.  As a rule, if an individual becomes a resident of Puerto Rico, gains from the sale of personal property will be from Puerto Rico sources, and excluded from US federal taxation under Section 933 of the US Internal Revenue Code (“US Code”). However, this capital gains exemption only applies to gains derived from the sale of securities and Act 22 does not provide for a definition of what constitutes securities for these purposes. Curiously, the term “securities” was not defined under Act 22.

On July 1, 2019, Act 60, known as the Puerto Rico Incentives Code, was enacted and made effective with the purpose of consolidating all the grants, incentives, subsidies, reimbursements or existing tax and benefits, as well as to promote Puerto Rico’s economic development.  One of the objectives of Act 60 is to establish the legal and administrative framework that will govern the application, evaluation and approval or denial of incentives from the Puerto Rico Government, as well as to maximize the impact of public funds, among others.  In connection to incentives for individual investors analogous to Act 22, Act 60 now provides a definition to the term securities and incorporates the term other assets; stating its eligibility, in addition to securities, for the special tax rate on capital gains. As such, Act 60 defines securities as any note, bond, promissory note, debt evidence, options, futures contracts, forward contracts, stock, and any other similar instrument or with similar characteristics, including derivative instruments adopted by circular letter, administrative determination, regulation or any other pronouncement made jointly by the Secretary of the Department of Economic Development and Commerce and the Secretary of Treasury; and other assets as commodities, coins, and digital assets based on blockchain technology.

As with any tax planning when doing business in Puerto Rico, the trading of cryptocurrencies should consider US federal tax implications.  On 2014, the Internal Revenue Service (“IRS”) issued guidance addressing the federal income taxation of virtual currency, including applicable examples.

As mentioned above, generally, gain or loss from the sale of personal property is sourced according to the seller’s tax home. Moreover, there are special sourcing rules for property held before a US resident individual becomes bona fide resident of Puerto Rico. In such cases, the taxpayer may elect to determine the US-sourced portion of the gain in reference to the individual’s possession holding period depending on the type of security.

Unlike US federal tax authorities, Puerto Rico tax authorities have not issued any rulings with respect to this matter. As such, federal pronouncements could be used as guidance in the absence of local legislation and regulations.  Despite this, Puerto Rico has taken a solid first step to promote the virtual currency industry by including it in Act 60 as an eligible asset subject to special tax rates on capital gains. This ranks Puerto Rico into a competitive position considering that beneficiaries of Act 60 and Act 22 (through the request of the special clause) will be able to source related capital gains to their residency place in Puerto Rico maximizing the tax benefits granted under such incentives laws. 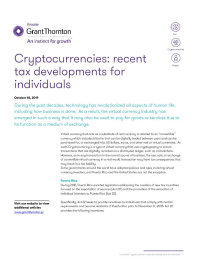