On September 29, 2017, the President of the United Stated of America signed into Law H.R 3823, known as the Disaster Tax Relief and Airport and Airway Extension Act of 2017 (the “Act”), which provides a series relief measures for zones and areas that were affected by hurricanes Harvey, Irma and Maria, among other matters.  Foremost among these is the concession of a business tax credit under Section 38 of the U.S. Internal Revenue Code of 1986, as amended (the “IRC”) to employers for employee retention.

Pursuant to Section 503 of the Act, an eligible employer affected by Hurricanes (as well as Harvey, Irma or Maria) may claim an employee-retention tax credit under Section 38 of the IRC equal to forty percent (40%) of the qualified wages of each eligible employee.

Meanwhile, qualified wages are those wages (as such term is defined in §51(c)(1) of the IRC) that are paid or incurred by an eligible employer to an eligible employee on any day after September 16, 2017 and before January 1, 2018, beginning on the date on which the trade or business was rendered inoperable at the principal place of operations and ending on the date on which significant operations were resumed at said place.  Section 503(c)(2)(C) of the Act specifies that the term qualified wages will include:

Though it is quite clear that above referenced credit is applicable at the federal level, the Act allows for its usage at the state level for Puerto Rico tax purposes.  Particularly, Section 504(d)(1)(B) states that the U.S. Secretary of the Treasury will pay to Puerto Rico an estimated amount that equals the aggregate benefits that would have provided to the resident of Puerto Rico if a mirror code tax system had been in effect.

Nonetheless, the applicability of this credit at the local level is dependent on Puerto Rico having a U.S. Treasury-approved plan under which Puerto Rico will promptly distribute the aforementioned payments to its residents.  To this date, neither the Puerto Rico Government nor its Treasury Department have presented the required plan for the application of the credit. 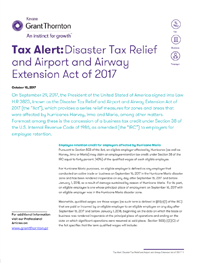