New due date for 2nd installment of income tax payment

Section 1061.17 of the 2011 Puerto Rico Internal Revenue Code, as amended (the “Code”), allows individual taxpayers that are not subject to the payment of estimated taxes the option to pay their income tax liability in two (2) equal installments – with the first installment due on the fifteenth day of the fourth month after the close of the individual’s tax year, and the second installment due no later than the fifteenth day of the sixth month after the first installment. For example, if Mr. X has a December 31, 2017 year end, the first installment for his 2017 income tax liability would be due on April 15, 2018, while the second would be due on October 15, 2018.

Due to a series of logistical hurdles, the Puerto Rico Treasury Department (“PRTD”) issued Internal Revenue Informative Bulletin Nos. 18-10 and 18-11 to respectively postpone 2017 Income Tax Return’s due date from April 17, 2018 to April 20, 2018, and (subsequently) to April 25, 2018.  Moreover, Internal Revenue Informative Bulletin No. 18-14 (“IB 18-14”) confirmed that the due date for the duly extended 2017 Income Tax Returns would be October 25, 2018.  Nonetheless, questions abounded as to whether this October 25 date would also apply to the second installment income tax payment.

Informative Bulletin 18-17 further states that in the event that the taxpayer fails to pay at least fifty percent of the corresponding tax liability in the first installment, he/she will lose the deferred payment benefit afforded under §1061.17 of the Code and be subject to interest and surcharges on the unpaid amount.

Please contact our Tax Department should you require additional information regarding this or any other tax issue.  We will be glad to assist you 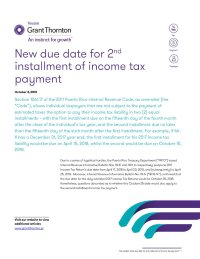