On August 23, 2017, the San Juan Superior Court (the “Court”) held that the municipal business contribution imposed by the municipality of Caguas, known in Spanish as the “Aportación Empresarial Municipal”, was illegal and/or ultra vires.

Background on Ordinances Nos. 28 and 37

On June 8, 2017 the municipality of Caguas instituted Municipal Ordinance No. 28, Series 2016-2017 (the “Ordinance”), to establish a temporary zero point thirty-five percent (0.35%) municipal business contribution, known as the “Aportación Empresarial Municipal” (the “AEM”), to both individuals and business that are subject to Municipal License Taxes in the municipality of Caguas and whose declared business volume is equal to, or exceeds, $3MM for the calendar year ended on December 31, 2016.

The Ordinance – which was further amended on June 23, 2017 through Municipal Ordinance No. 37, Series 2016-2017 to limit the number of fiscal years to which the AEM would apply – established that the AEM would be effective on July 1, 2017, and would apply to fiscal years 2017-2018 and 2018-2019.  Taxpayers subject to the AEM would be billed by the Municipality with the tax being due on August 15 of each applicable year.  Nevertheless, the taxpayer would be allowed to pay for the AEM in four (4) installments: August 15, November 15, February 15 and May 15.  If the taxpayer failed to comply with the payment of the AEM, the Ordinance allowed for

the imposition of one percent (1%) monthly interest and surcharges of up to twenty-five percent (25%) on any unpaid amount.

Arguing that the imposition of the AEM on the same tax base used for the computation of the Municipal License Tax was unlawful since it exceeds the powers granted to the municipalities by the Autonomous Municipalities Act of the Commonwealth of Puerto Rico of 1991, as amended (“AMA”), and the Puerto Rico Constitution, during the month of July 2017 various business with operations within the municipality of Caguas, such as Caguas Expressway Motors, Inc., Costco Wholesale Corporation, AT&T Mobility Puerto Rico Inc. and DirecTV Puerto Rico LTD (the “Plaintiffs”), sought a declaratory judgment to nullify and declare its illegality.

Given the similarity of the complaints, the Court consolidated the aforementioned businesses’ actions against the municipality of Caguas and on August 23, 2017 granted summary judgment in favor of the Plaintiffs.  The Court found that:

Therefore, even though the municipality of Caguas described the AEM as a contribution, the Court counters that it is an additional 0.35% tax on the top of the maximum 0.50% municipal license tax rate allowed under the MLTA, thus raising the effective tax rate a 0.85% that is not allowed under law.

Is there any recourse for the Municipality of Caguas?

Since the Court’s holding was not final, pursuant to Puerto Rico Rules of Civil Procedure, the Municipality may file (i) a Motion for Reconsideration with the Court within fifteen (15) days after judgment is entered in the docket or (ii) a Motion to Appeal to the Puerto Rico Court of Appeals within sixty (60) days after the judgment is entered in the docket.  If the latter is not filed within the aforesaid 60-day period, the Court’s decision will be final.

It is important to note that although the Court’s decision is not yet final, it could serve as a general deterrent to other municipalities that are vigorously exploring ingenious revenue-increasing methods that could run counter to the definite intent of the legislator, as expressed in the MLTA and the Constitution.  Conscious that many municipalities are struggling with their revenue influx and added burdens that were brought upon by the central government’s fiscal crisis, the Puerto Rico Legislature is currently evaluating various measures that would expand the municipalities’ powers within their territorial confines.

Note: As highlighted in our Tax Alert dated July 1, 2016, the Puerto Rico Oversight, Management, and Economic Stability Act (PROMESA), seeks to provide Puerto Rico with fiscal and economic discipline through the creation of a control board, among other things. Virtually every fiscal decision by the Government of Puerto Rico will be made or approved by the Oversight Board created by PROMESA. On this regard, the board has authority to prevent the execution or enforcement of a contract, rule, executive order or regulationto the extent that it is inconsistent with the approved fiscal plan. 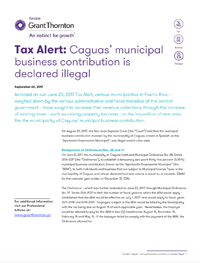