Most recent amendments to incentive acts in Puerto Rico

Certificate of Compliance, and Certifying and Granting Agencies’ functions
As noted in our December 28, 2016 Tax Alert, Act 187-2015 was approved to create the Interagency Validation Portal for the Granting of Incentives for the Development of Puerto Rico (the “Portal”). Basically, the Portal aims to, among other things, be used as a vehicle through which Certifying (Issuing) Agencies (“CIA”) and Granting (Recipient) Agencies (“GRA”) will communicate to process, oversee, validate and award the tax incentives from a number of legislative acts which promote the economic development of Puerto Rico.  In addition, through the issuance of a Certificate of Compliance (“Certificate”), both CIA and GRA validate that the person or entity (“Grantee”) meets the specific requirements of the law by virtue of which a particular privilege is granted and, therefore, qualifies for the tax incentives.

Considering that the government of Puerto Rico is currently working on an Incentives Code to validate the concession of tax incentives by estimating its economic impact in the Island, and a Tax Reform is expected to be presented before the Legislature of Puerto Rico during this year, Act 91-2017 amends Act 187-2015 by adding Article 115, which defers the effectiveness of Act 187-2015 until January 1, 2018. During this period, both CIA and GRA will be exempted from the issuance and receipt, respectively, of the Certificate of Compliance and any other documentation related to it.  To this effect, applications under the tax incentives laws as described by Act 187-2015, must be evaluated and processed without them being subjected to the Certificate of Compliance requirement.

Base Period Income Limitation
Pursuant to Article 4(c) of Act 20-2012 an eligible business that at the time of filing its exemption application, is engaged in an export activity covered by Act 20, will enjoy its tax incentives but only in relation to that portion of net income that exceeds the average net income generated by such business during the three taxable years preceding the aforesaid application date (“base period”).

Mindful of the importance of maintaining economic stability and competitiveness through the exportation of services, Act 94-2017 amends the above referenced Article 4(c) to reduce the base period income amount by twenty-five percent (25%) annually, until it is reduced to zero (0) on the fourth taxable year of the Exempt Business’ decree term (the “Phase Out”).  It is important to note that Phase Out will only apply to tax exemption decrees granted after June 30, 2017. 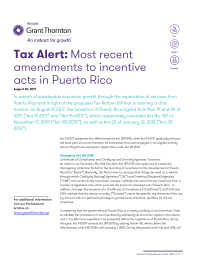