5 Tax matters you should consider before relocating to Puerto Rico

For the past decades, the Government of Puerto Rico has been offering different tax benefits and incentives to local and foreign business entities that either established new operations in Puerto Rico or relocated them to the island. On January 12, 2012, the Government of Puerto Rico (1) enacted Act 20 in an effort to turn the island into an international hub of export services and, (2) enacted Act 22 to promote that individuals relocate to the island by providing certain exemptions from local income taxes.
Contents

As a result of the enactment of Acts 20 and 22, now Chapters 2 and 3 of the Puerto Rico Incentives Code (“Incentives Code”), many individuals and businesses have re-examined their long-term tax plans and structures and are considering a relocation to Puerto Rico to take advantage of the tax benefits. In general, the Incentives Code provides standard tax benefits to certain businesses with eligible activities that obtain a grant of tax exemption (“Grant”), such as:

In the case of individuals with a Grant under Chapter 2 of the Incentives Code, the general benefits are 100% exemption from income tax on interest, dividends, and certain capital gains accrued after becoming a resident of Puerto Rico until taxable year 2035.

Regardless of how attractive the Puerto Rico tax incentives may be, they are not for everyone; there is no "one size fits all" formula. Therefore, prior to relocating to Puerto Rico, below you will find 5 tax questions you should answer prior to committing into making Puerto Rico your permanent domicile:

1. Are you and your family committed to moving permanently to Puerto Rico?

For federal income tax purposes, the federal tax law has its own rules to determine whether you are considered a bona fide resident of Puerto Rico or not. Namely, you must meet three requirements:

Proper determination of residency is essential since a bona fide resident of Puerto Rico is taxed in the island on their worldwide income and have the exclusion from federal taxation discussed above. It is important to keep in mind that compliance with the bona fide residency rules herein included must be made on an annual basis, and mere physical presence is not enough for the local and federal tax authorities.

Therefore, becoming a bona fide resident of Puerto Rico will require compromises from you and your family, including successfully completing and documenting a permanent move to Puerto Rico. This can be a deal-breaker for many interested individuals and families.

2. Do you currently own investments that generate interest, dividends or capital gains?

In addition to potential continuous federal taxation of certain passive income regardless of your move to Puerto Rico, as a condition for granting the tax benefits in Puerto Rico, the Incentives Code requires, among others, that you:

Therefore, a relocation to Puerto Rico will not necessarily mean tax savings for you. As previously stated, there is no "one size fits all" formula.

3. What is your current business structure and what are the tax implications of modifying it?

United States international tax rules are complex and in constant change. One of the benefits associated with the use of corporations, for example, is the deferral of current federal taxes on income. Usually, earnings of a foreign corporation (not organized under United States law) is not federally taxed until the foreign corporation repatriates its earnings (i.e., dividends). To avoid this tax deferral, the federal government has enacted “safety measures” known as anti-deferral tax regimes. For example:

What does a “CFC status” means? In general terms, it means the United States Shareholder will not be able to use the tax deferral rule, and for federal income tax purposes, the earnings of the foreign corporation may be deemed as distributed and taxed at the federal level even though they were not. Moreover, the Tax Cuts and Jobs Act of 2017, made significant.

Therefore, if as part of your relocation to Puerto Rico you plan to set up a legal entity under Puerto Rico law, and have a United States citizen as a shareholder, owner, partner, or member of the Puerto Rico corporation, you should work with a knowledgeable international tax expert to determine the local and federal tax consequences of the proposed tax structures and select the most efficient one.

4. Will you continue to conduct business within the United States?

If you have built your personal and professional life in the United States, suddenly cutting ties when relocating to Puerto Rico seems nearly impossible. As such, each situation needs to be reviewed and analyzed on a case-by-case basis. For instance, an individual relocating to Puerto Rico whose income is solely from interest, dividends and/or capital gains will have a different situation than an individual who is materially participating in their United States-based business. Consequently, if as part of your business model you need to maintain a connection with the United States (i.e., business travel periodically to the Mainland), you need to be cognizant of certain important tax provisions, including source of income and engaged in trade or business federal tax rules.

Engaged in trade or business determination is done in a case-by-case basis, and generally requires that the business’ activities in the jurisdiction are closely and directly related to the derivation of profit, rather than being incidental, ministerial or clerical.

5. Lastly, and perhaps most importantly, have you visited the island and validated move is a good fit for you and your family?

Although the year-long excellent weather and potential tax savings may be good reasons for some people to relocate and become bona fide residents of Puerto Rico, time has told that it is not convenient for everybody. When making your research about Puerto Rico and contemplating the pros and cons of relocating to the island, we encourage you to visit the island prior to making the final decision and see for yourself if permanently moving your domicile to Puerto Rico is an adequate and plausible decision based on your personal circumstances. Moving to a new country may be daunting to some, and international tax rules are complex and dynamic, so the move will only be worth if it fits your business, lifestyle, and family in the long run. 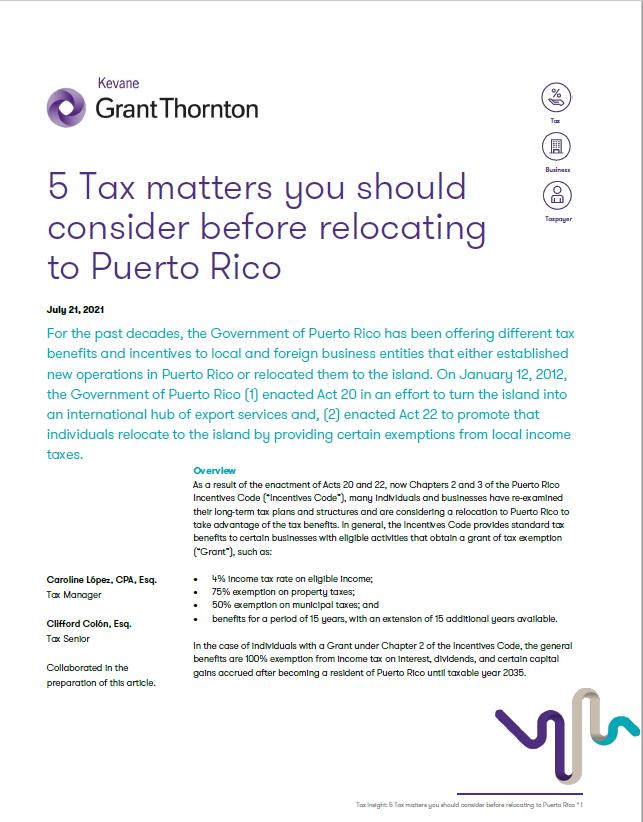