Levying new taxes or raising established ones has become the “go-to” treatment for the Municipalities ailing coffers.

In 1993, an Irish band called The Cranberries released their debut album, Everybody Else Is Doing It So Why Can’t We?  To which one might ask, “What does this have to do with Puerto Rico taxes? “  Well, not much, actually.  Except that said album title succinctly sums up the current mentality of Municipalities in Puerto Rico when it comes to levying new taxes:  “if Municipality X can raise taxes, why can’t we?”

Municipalities in Puerto Rico, already cash-strapped and forced to undertake additional essential services that were once handled by the Central Government in light of the latter’s massive debt, have flexed their administrative muscle to ensure more economic resources.  From the Municipality of San Lorenzo, who imposed a special “excise tax” that is equal to the greater amount between 50% of the municipal license tax paid for 2015 and 2016, to the Municipality of Barranquitas’ recent increase of both real and personal property tax rates, the common theme amongst the diverse City Halls of Puerto Rico has been either the levying of new taxes or the raising of established ones in order to palliate their particular fiscal crises.

Understandably, Taxpayers have not been amused.  Both the San Lorenzo and Caguas taxes have proved controversial and are currently being challenged in the local courts as unconstitutional.  Basically, under the Municipal License Tax Act of 1974, as amended, the municipalities can impose their corresponding municipal license tax on the business volume within their territorial limits but the tax cannot exceed the established 0.50% tax rate (1.50% in the case of a financial business).  Though it is understandable for municipalities to seek additional revenue streams in these challenging times, to rename as an “excise tax” or as a “municipal business contribution” what is tantamount to an addition to the municipal license tax, will be troublesome to successfully defend before both the courts of law and of public opinion. 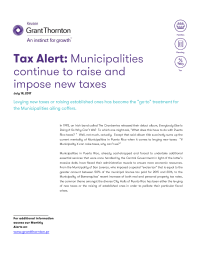