The road to financial services deregulation

President Trump met with a group of community bankers in March 2017, and stressed the need to reduce the regulatory burden on financial institutions and indicated a desire to tailor regulations more to the size of banks.

Whether the Trump administration can reverse or simply bend the regulatory trend that began with the 2008‐2009 financial crisis and continued through the 2010 passage of the Dodd-Frank Wall Street Reform and Consumer Protection Act (Dodd-Frank Act) remains to be seen. However, the President’s stated aims and the levers available to the administration and Congress clearly indicate that some degree of financial deregulation is forthcoming.

One lever is President Trump’s executive order to all regulatory agencies to eliminate two existing rules or regulations for every new one they implement. This January 30, 2017, order could be quite effective in agencies with numerous rules and regulations, such as the Federal Reserve, FDIC, Office of the Comptroller of the Currency (OCC) and Security and Exchange Commission (SEC). Acting on this directive could be more difficult at agencies with relatively few rules, such as the Consumer Financial Protection Bureau (CFPB).

Perhaps the most powerful lever is the President’s ability to appoint regulatory agency leaders, including, potentially, individuals from the financial services industry who will share his appetite for deregulation. With many senior-level vacancies at agencies such as the Federal Reserve, U.S. Treasury Department, OCC and the SEC, and the head of several key agencies such as the FDIC nearing the ends of theirs terms, the administration should have ample opportunity to appoint new leaders. New leadership brings the prospect of relatively quick change in the agency’s approach to supervision of the financial services industry. If the President’s appointees to date can be taken as indicative, those new leaders can be expected to be businesspeople willing to initiate vigorous change in the priorities and even missions of their agencies, with the goal of decreasing federal involvement in business operations and providing substantial regulatory relief.

Also powerful is the ability of Congress, in concert with the President, to set regulatory agency budgets or impose hiring freezes, which directly affect staffing and other resources and thus an agency’s supervisory activities. For example, although bank examinations are mandated, limited resources may lead to limited-scope examinations.

Finally, an agency can decide if it wants to adopt or implement rules that have been proposed but not yet enacted. Three major rules that have been proposed, but which may not be adopted or could be delayed or subject to revisions, include the Incentive Compensation Rule, the Net Stable Funding Ratio rule and the Department of Labor’s Fiduciary Rule. (The latter has been issued, but at this point it appears that it will not be implemented.) While this lever does not reduce existing regulation, it does forestall further regulation and eliminates the need for institutions to comply with rules they may have been expecting.

These levers, employed in an atmosphere in which regulatory rollback has broad political and industry support, can almost certainly enable some level of deregulation. Yet deregulation has been driven by laws passed by Congress. Those laws have been translated into rules and regulations by the relevant agencies, with public comment from the industry, consumer groups and other stakeholders. Those laws may not be easily rolled back. In addition, they have arguably generated benefits, and much of the industry has learned to live with the current levels of regulation.

So, what can be expected?

For a window on priorities and possible outcomes of deregulation, we can turn to legislation recently reintroduced by Chairman of the House Financial Services Committee Rep. Jeb Hensarling (R-TX) — H.R. 10, the Financial CHOICE Act, in which CHOICE stands for Creating Hope and Opportunity for Investors, Consumers and Entrepreneurs.

Conceived as an amendment to the Dodd-Frank Act, the bill provides the best indicator of Republican plans for deregulation. It would:

This bill would also enable banks to elect to become eligible for certain relief from current regulatory requirements and be deemed well-capitalized for purposes of corrective action if the institution: (a) maintains a leverage ratio of at least 10% and (b) has a composite CAMELS rating of 1 or 2.

Even without legislation along these lines, the above-noted levers could, in effect, bring about some of these changes to varying degrees. Changes in agency leadership and priorities could, for example, increase the threshold for Dodd-Frank Act stress testing from the current $10 billion in assets to $25 billion or $50 billion. Similarly, the asset threshold for compliance examination authority for banks by the CFPB could be raised. Changes short of new legislation could also temper the more intrusive forms of supervision, such as multitier examinations by the Federal Reserve, the FDIC and the OCC.

Of course, a rollback in regulations will affect various institutions differently. The leadership at each institution must therefore carefully monitor developments and consider the likely impact of any specific steps toward deregulation.

Although financial and economic performance has varied among institutions and regions, the industry is poised for deregulation at a time when it has, overall, registered record profits and the U.S. economy is in its eighth year of expansion. While the costs and compliance burdens have been enormous, financial institutions have clearly realized benefits. Among the most important of these have been enhanced risk management and governance, improved risk-based decision-making, and adoption of less risky business models.

To the extent that these regulatory byproducts have benefitted institutions and their stakeholders, they might be retained. Indeed, with a reduction in the associated compliance and reporting burdens, they may become downright attractive. As regulatory demands proliferated, well-managed institutions worked hard and invested much to achieve operational, process and internal reporting enhancements while pursuing compliance. Those institutions have probably experienced the greatest operational and risk-related benefits as a result of their compliance efforts.

For example, consider the value protected and generated at financial institutions that have:

In addition, any road to deregulation will pass through a challenging risk landscape. Since 2010, cyber threats have skyrocketed with the proliferation of devices, payment mechanisms and online banking. Conduct risk — a term virtually unheard of before the crisis — has been recognized as a threat from within organizations and third parties. Both cyber and conduct risk events regularly make headlines, contributing to reputation risk (another new term).

Reliance on third parties has intensified in financial services, with the adoption of data warehouses, cloud computing and software as a service. Many third-party relationships in banking are now rooted in fintech — technology-enabled financial services. As institutions consider fintech opportunities and threats, they need methods for assessing and managing both, particularly when doing business with third parties in this rapidly evolving industry.

Financial services regulations, for all their detail, tend to address actual risk at fairly high levels — capital adequacy, risk disclosures and board practices — leaving institutions to manage their specific risks as they see fit. Therefore, institutions that have enhanced their risk management infrastructures and practices might think deeply before dismantling them or re-risking their institutions.

Moreover, given the disruption and change we’ve seen in financial services and politics, it is all too likely that another change in direction — perhaps toward re-regulation — may occur at some point in the not-too-distant future. While complying with regulatory demands that cease to exist would be wasteful, it may be equally wasteful to dismantle the risk management and governance infrastructures that have come about as a result. 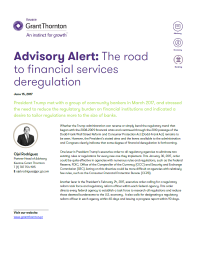