On April 26, 2017, President Donald J. Trump announced his proposed 2017 Tax Reform for Economic Growth and American Jobs, which calls for lower individual tax brackets, the doubling of the standard deduction, the repeal of both the alternative minimum tax and the estate tax, and the expansion of child tax credits and dependent care expenses. It also proposes lowering the business tax rates to 15%. The reform also calls for the US to transition from its current worldwide tax system to a territorial tax system, and for the enactment of a one-time repatriation tax on the foreign earnings of US companies. On the other hand, the Republicans have issued their proposed tax plan known as “A Better Way” tax reform blueprint.

The following table intends to compare the guidelines under both tax reform proposals. 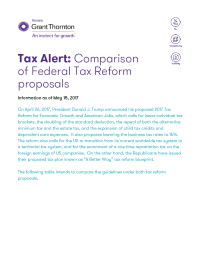