To align the accounting for production costs for episodic content produced for television and streaming services with the accounting for production costs for film, the FASB issued the proposed ASU, Entertainment – Films – Other Assets – Film Costs (Subtopic 926-20) and Entertainment – Broadcasters – Intangibles – Goodwill and Other (Subtopic 920-50): Improvements to Accounting for Costs of Films and License Agreements for Program Materials (a consensus of the FASB Emerging Issues Task Force). The proposed amendments would apply to broadcasters and entities that produce and distribute films and episodic television series.

The proposal would also amend the existing guidance related to: 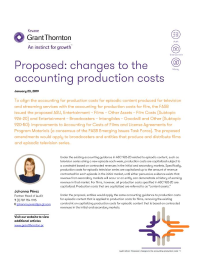