Federal tax relief for victims of earthquakes in Puerto Rico

On January 17, 2020 the Internal Revenue Service (“IRS”) issued Press Release PR-2020-01 to announce a tax relief for the victims of the earthquakes in Puerto Rico.

The announcement states that the declaration of disaster allows the IRS to postpone certain deadlines of filings and/or payments with an original due date on or after December 28, 2019 and before April 30, 2020. Filings due within those dates will have an additional extension of time to file until April 30, 2020. Some of these the filings are as follows:

Additionally penalties imposed for payroll deposits and excise tax due on or after December 28, 2020, and before January 13, 2020, will be abated if the tax deposit was made by January 13, 2020.

To such effect, the new due dates for the following tax returns and/or payment of taxes are as follows:

The IRS does not include on the postponement period the following informative returns and/or forms:

Taxpayers who receive notices of penalty from the IRS for late filing or late payment corresponding to the postponement period must contact the IRS to request the abatement of the penalty.

Taxpayers affected by the disaster that reside or have a business outside the covered disaster area can contact the IRS to request the tax relief.

Pursuant to Treasury Regulations §301.7508A(d)(1), affected taxpayers eligible for the postponement of time to file returns, pay taxes and perform other time sensitive acts include:

As detailed on Publication 547, affected taxpayers in a disaster area declared by the federal government can claim disaster related casualty losses on their federal income tax for the year in which the event occurred or the year prior to the event. The heading Disaster Designation “Puerto Rico, Earthquakes” and the disaster declaration number, FEMA 4473 must be included on either the 2018 or 2019 return to expedite the refund process. As for individuals, the deduction for personal property losses may be for losses that are not covered by an insurance or any other reimbursements.

Affected taxpayers that request copies of previously filed tax returns can do so using Form 4506 or Form 4506-T. The IRS will waive the fees of the request and expedite the process. Taxpayers must indicate the Disaster Designation “Puerto Rico, Earthquakes” in red ink at the top of the corresponding form.

On December 19, 2019 the U.S. Treasury Department and the IRS issued the much-awaited final regulations implementing the Opportunity Zones tax incentive set forth under Section 1400Z-2 of the US Code. In this alert we will discuss the two provisions related to the major disaster declaration in Puerto Rico, which may impact the rules applicable to projects located in the municipalities of Guánica, Guayanilla, Peñuelas, Ponce, Utuado, and Yauco.

Qualified Opportunity Funds (“QOFs”) and Qualified Opportunity Zone Businesses (“QOZBs”) are limited in the amount of cash and cash equivalents that both may hold. At the QOZB level, however, a “reasonable” working capital may be held if the following requirements are satisfied:

The final regulations provide that, if a project that otherwise meets the requirements of the 31-month working capital safe harbor is located within an opportunity zone designated as a part of a Federally declared disaster area, the QOZB may receive up to an additional 24 months to consume its working capital assets, provided the project is delayed due to that disaster. This may expand the total period to deploy capital by a QOZB affected by the recent earthquakes in the municipalities of Guánica, Guayanilla, Peñuelas, Ponce, Utuado, and Yauco from two and a half years to four and a half years (55 months). If a QOZB intends to avail itself of this extension, it is recommended that it documents effectively the delays caused by the earthquakes, amends the written plan, and execute the schedule and usage of the capital in a manner consistent with the amended plan.

Time Period for a QOF to Reinvest Proceeds

Section 1400Z-2(e)(4)(B) provides that the Secretary of Treasury shall prescribe regulations to ensure that a QOF has a reasonable period of time to reinvest the return of capital from investments in qualified opportunity zone property (“QOZP”) and to reinvest proceeds received from sale or disposition of QOZP. In the proposed regulations, the QOF was allowed a period of 12 months to reinvest proceeds received from the return of capital or the sale or disposition of some or all of its QOZP. If the investment was made during said period beginning on date of the distribution, sale, or disposition, then the proceeds were treated as QOZP in evaluating whether the QOF satisfied the 90% investment standard to the extent the proceeds were continuously held in cash, cash equivalents or debt instruments with a term of 18-months or less. The proposed regulations also provided that the 12-month reinvestment period is tolled while waiting on government action if the QOF has completed the application for action and is awaiting a government response.

The final regulations provide that a QOF may receive up to an additional 12 months to reinvest such proceeds if additional delays are caused by a Federally declared natural disaster. The QOF must invest proceeds as originally planned before the disaster. For example, if a QOF is unable to invest in a certain QOZB property because the property is in a Federally declared disaster area, the QOF must invest the proceeds in similar property located in that opportunity zone. Therefore, affected QOFs will have a period of up to 24 months to make such reinvestment as originally planned provided the delay is caused by the earthquakes in the affected municipalities. 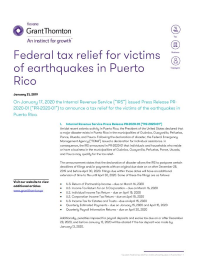