The election victory for former Vice President Joseph Robinette “Joe” Biden Jr. (“President”), represents an important change in the outlook for tax policy and planning in the United States (“U.S.”) and Puerto Rico. After the U.S. election, and the results of the Georgia runoffs in early 2021 came through, the Democrats gained control of all three levers of power after the retention of power in House majority, and regained Democrat control in the Senate.

This article will provide a summary of the most relevant President’s campaign tax proposals that could represent major changes going forward regarding Puerto Rico, highlighting important planning considerations.

The President takes office with one of the most robust and ambitious tax plans in recent history. During his campaign, he unveiled an extensive set of proposals covering most areas of tax.

However, it is important to keep in mind that campaign proposals lack many details by design. Campaign tax platforms are intended first and foremost as talking points to appeal to voters, and candidates are generally free to avoid fleshing out details, addressing administrability, or even making sure the proposals work consistently. Succinctly, the President proposes the following increases to current rates:

Does not include net investment income tax or any state or local tax.

The President proposes a 15% minimum tax on corporate book income “so that no corporation gets away with paying no taxes”.

There are virtually no details available on this proposal, which often appeared to be more of a talking point in response to press reports revealing large corporations showing financial statement profits while paying little federal income tax.

Although there is little information in official campaign documents, the press has reported that it is intended to apply only to companies with more than $100 million in net income.

This proposal would likely face an uphill battle in Congress, and it is unclear how it could be structured.

The President has made “onshoring” production a major campaign issue, using tax proposals as a major aspect of a “carrot-and-stick approach”.

To incentivize onshoring, he proposes 10% advanceable credit for companies that make investments to:

To combat offshoring, The President proposes a penalty on the profits of U.S. companies derived from producing goods or services overseas and selling them in the U.S. For services, the penalty applies if those jobs could have been performed in the U.S.

The penalty is imposed as a 10% surtax on the amount of a company’s corporate tax, which, under the President’s proposed 28% corporate tax rate, would result in a 30.8% tax against applicable profits.

The President proposes to reform the GILTI significantly.

He has discussed raising the effective rate to 21% and applying it separately to each country. It is not entirely clear how else he envisions reforming the operational rules, and how this might affect the proposed rate. Much of the language surrounding this proposal appears to contemplate expanding the scope of GILTI so that it operates more like a true global minimum tax.

In addition, the 21% proposed rate appears to derive from the idea of repealing the current GILTI deduction. Under current corporate rates, this would result in a 21% effective GILTI rate.

Under the President’s proposed 28% corporate rate, the effective GILTI rate would be 28% without a deduction.

Given his repeated use of the 21% rate in his material, he may be considering a mechanism to limit the GILTI rate to 21% even with a 28% corporate rate.

Moreover, and this is particularly relevant to Puerto Rico, we must see what happens to certain bill proposals that recommend a preferential tax treatment on the GILTI implications for manufacturing operations conducted in the U.S. possessions, or the implementation of the Economically Distressed Zones.  (please refer to our previous article for more information).

The President never formally proposed a financial transactions tax, although he has expressed support for it in informal comments.

Financial transaction tax proposals floated by other Democrats during the presidential primary would generally tax high-volume trade of stocks, bonds, and derivatives at varying rates equal to a fraction of 1%.

The President has also criticized the tax treatment of carried interest in the past but has not formally called for its repeal as part of his campaign documents. This silence is likely because his proposal to treat all capital gains as ordinary income would effectively end any carried interest benefit.

If a preferential rate for capital gains in general is retained, carried interest specifically could get renewed scrutiny.

The President proposes to make the New Markets Tax Credit permanent with a $5 billion allocation each year. This is similar to enhancements made in the infrastructure bill advanced by House Democrats in July 2020.

The President also supports Opportunity Zone tax incentives but is critical of the way the program is currently administered. He has proposed reforms largely aimed at increased reporting.

The President pledged not to raise income taxes on “a single person making under $400,000 per year.”

The President has not specified whether the $400,000 threshold would apply to taxable income or adjusted gross income, or how it could differ by filing status.

There is no information on the potential interaction between a cap on the value of itemized deductions and the Pease phaseout, and it is unclear how either of these provisions could interact with any potential modification or repeal of the $10,000 cap on state and local tax (SALT) deductions.

The President proposes taxing capital gains as ordinary income for taxpayers with over $1 million in income, nearly doubling the current rate from 20% to 39.6% (not including net investment income tax).

This is often called a “doughnut hole” approach because only wages between the current cap and $400,000 would be free from tax.

It is not clear, however, whether the President is proposing to impose only the individual 6.2% share of the Social Security tax on earned income over $400,000, or if employers would also be required to pay their 6.2% share on this income.

The President’s proposals change the tax outlook for the U.S. and Puerto Rico, and taxpayers should begin to evaluate their long-term and short-term tax planning.

While there are strategies that can offer benefits in advance of tax increases, taxpayers should be cautious.

It will be important to monitor the legislative process to see how the proposals evolve and how quickly tax legislation is moving so that planning can be adjusted appropriately.

This article has been adapted from a publication titled “Biden win changes tax policy and planning outlook”, authored and published by Grant Thornton International on November 9, 2020. 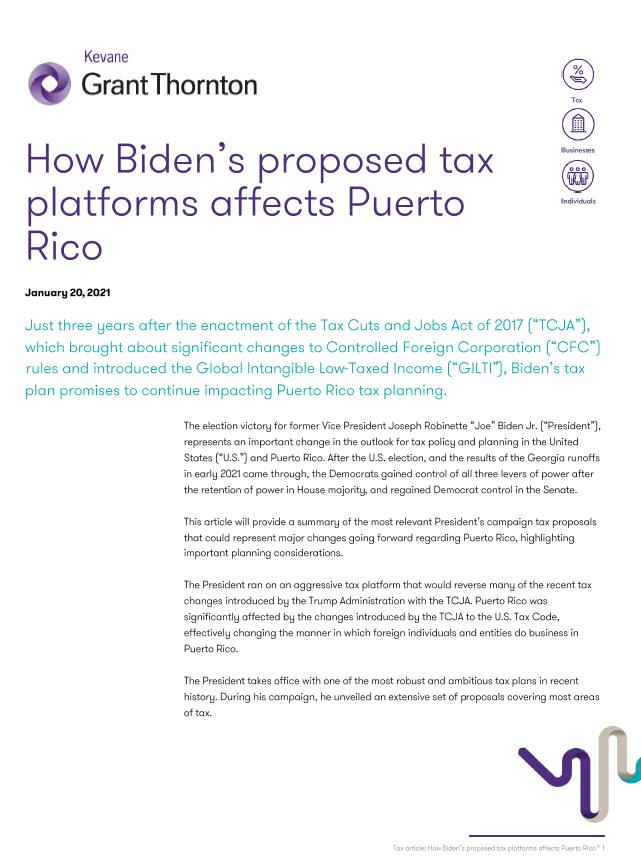