Organic growth is the default option for many businesses but in a fast-moving world, is it too ‘safe’? How can leaders choose a growth strategy that accelerates business growth in a sustainable way while overcoming a fear of the unknown?

For most businesses, early years are characterised by organic growth. It’s relatively low-risk as it tends to draw on existing resources, hits the balance sheet in a controlled manner and forms part of business as usual. Typically, it will have served businesses well and allowed them to reach a point of maturity. But can it continue to serve their needs when the pace of change is almost overwhelming as technological advances disrupt every industry?

It’s at this point that many leaders look to inorganic growth to take their business to the next level, whether through the acquisition of new technology, diversification or expanding market share.

Prashant Mehra, partner at Grant Thornton India, says companies have to consider certain factors. “They need to decide between doing it themselves or inorganically. The best solution is often to grow inorganically, especially in emerging markets such as India or China. Speed is important in these dynamic economies because you could acquire thinking that could help you grow overnight. At the back of everyone’s mind is the concern that if you miss the bus, then you’ve missed it for good.”

The rewards for getting it right can be great. Take Datagroup SE. Since its floatation in 2006, the German IT service company has completed one acquisition every year; the most recent being ikb Data for an undisclosed sum[i]. “It’s a real success story,” says Hanno Hepke, a partner in corporate finance and advisory services at Warth & Klein Grant Thornton, Germany. “It’s a mid-sized company with a €350 million turnover that has developed an approach to the market driven by new technologies and consolidation. It tackles these two areas through a combination of organic growth and targeted, strategic acquisitions,” he says.

There are pros and cons to all growth strategies. The key, easier said than done, is to pursue an appropriate growth strategy while understanding the risks and, crucially, how to avoid them.

The advantages of acquisitions

Acquisition as a strategy offers well-documented advantages, says Hanno, particularly as mature markets can lead to margins being squeezed and organisations needing size to keep up with market targets. “It’s about getting your hands on something new, whether it’s a product, technology or know-how. Alternatively, it’s access to something you don’t currently have in the market, or simply creating growth options through size. An acquisition that looks financially attractive can be much more tempting than organic growth.”

For Indian facilities management company ‘Mortice’, acquisitions have become increasingly important. Prashant explains: “In the first few years it concentrated on organic growth but then it raised capital on the London Stock Exchange. Over a couple of years it made a spate of acquisitions, including in Singapore (buying a 51% stake in Frontline Security for $2.7 million in 2015)[ii] and the UK (Office & General Group bought for £6.5 million in 2015)[iii].

“Mortice has had remarkable growth,” says Prashant. “When it floated it was a $10 million company and today it’s more than ten times that size. The acquisitions have drastically improved its bottom line as well as its top line. More importantly, the company now has the tools to keep growing and acquire new customers because it has the confidence from operating in two of the most developed economies of the world. It may venture into other emerging markets as a result.”

For all the opportunities involved in acquisitions, there are also risks. Prashant believes companies set on acquisition as a strategy should tread carefully. “There is a lack of experience in this space. Most mid-sized businesses have never done this before and there are lots of hurdles, whether it’s valuation, financial diligence, tax structure or the whole transaction process.

Prashant points to integration as an often overlooked area. “I always say that a successful transaction is one that is signed off and then over the next couple of years meets its intended objective. The integration process is critical. There is huge debt loaded on to the acquired company from day one and you need to ensure you get your money back quickly.”

Hanno agrees: “When large corporates acquire another business, it’s a familiar process. Most of the time it will be smaller than the acquiring entity and it won’t change the identity of the acquirer. However, in mid-sized companies every acquisition has the potential to have an impact on the identity of the acquiring company. It’s not taking on a new person or developing a new product: it’s taking on a whole new entity, so there needs to be a thorough integration process.”

For companies contemplating inorganic growth the first step is to define their objectives over the short, medium and long term. If the best tool is acquisition, then the company needs to decide on the level of priority – whether to go active instead of passive. “Being active means looking for the right targets,” says Hanno. “And it’s always plural because if you only look for one target then what happens if it doesn’t go ahead? You’re back to square one.”

The second step is to raise awareness that you want to acquire. “Talking about your plans to develop makes it clear that you have an active will to do something,” says Hanno. “Although, when it comes to approaching targets there is a benefit of not going direct, otherwise your name will be out there very quickly as someone with deep pockets.”

In terms of financial modelling and the ability to move, the process can only start when there is a precise target, although firms can check what types of third-party financing are available and what terms and conditions they would need to make it work. “You don’t need the precise amounts from the other party to define what level of acquisition you can afford from a pricing perspective when you look at your own future development,” advises Hanno.

Make a decision based on logic

The risks of mergers and acquisitions are outlined in a recent Grant Thornton report, Reducing risk in cross-border transactions: tips for navigating the M&A process. However, for many mid-sized organisations that have relied on organic growth to get them to the point of maturity, the risks of not acquiring are perhaps greater than those of it going wrong.

As Hanno says: “In our discussions with German mid-sized companies we frequently hear that acquisitions are expensive and risky. I say: ‘What’s more dangerous – doing the acquisition and then having the access to the know-how and dealing with the issues that come with it, or not having it?’

“Logically, it is more dangerous not to take the next step in the development of your market because you risk being left behind which may spell the end of your organisation.”

To find out more about the opportunities presented through inorganic growth, contact: Hanno Hepke, Prashant Mehra or one of our member firm merger and acquisition specialists. 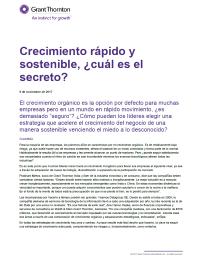