Puerto Rico’s reconstruction in the wake of Hurricane Maria’s devastation has brought upon a series of logistical and fiscal challenges, which require the government to respond in efficient and agile manner.  To facilitate the envisioned recovery, the Government of Puerto Rico has entered (and will enter) into various contracts with service providers within and without Puerto Rico.

Notwithstanding their high public interest in light of our current situation, these contracts are subject to the 2011 Puerto Rico Internal Revenue Code’s (the “Code”) dispositions on withholding at source and filing requirements.  However, in order to achieve an effective fiscal administration in the aftermath of Hurricane Maria, the Puerto Rico Treasury Department (the “PRTD”) issued Administrative Determination No. 17-28 (“AD 17-28”) on November 10, 2017.

AD 17-28 covers service contracts that are formalized after September 19, 2017 but before January 1, 2018, between the Government of Puerto Rico, and either a foreign service provider or local service provider.

Who is a foreign service provider?

A foreign service provider (“FSP”) is defined as foreign contractor that as entered into a service contract with the Government and is not engaged in trade or business in Puerto Rico.  Under regular circumstances, this contractor would be subject to a 29% withholding at source.

Under AD 17-28, the FSP must first determine if, given the nature of the service contract with the Government, it will be deemed to be engaged in trade or business in Puerto Rico and notify the Government during the contract negotiation process. Nonetheless, the FSP may opt to be treated as being engaged in trade or business in Puerto Rico for tax purposes by including the corresponding option in the contract (the “Option”). Copy of the contract, along with the corresponding option and explanatory letter, must be filed with the PRTD within thirty (30) of its execution.

Contracts that were ratified prior to AD 17-28 may be amended to include the option, along with the abovementioned explanatory letter, within thirty (30) of AD 17-28’s publication.

As a general rule, a nonresident employee rendering services in Puerto Rico would be subject to either a 20% (U.S. citizen) or 29% (nonresident alien) withholding at source.

AD 17-28 establishes that the withholding at source for payments made to a nonresident, U.S. citizen will be ten percent (10%). Moreover, said amount will represent the whole of the individual’s fiscal responsibility towards the government of Puerto Rico, and he/she will be exempted from filing a Puerto Rico income tax return. On the other hand, in the case of nonresident aliens, the customary 29% withholding at source remains in place.

Similar to FSP, a foreign subcontractor – that is, any juridical entity organized under the laws of the U.S. or any other foreign jurisdiction that is not considered to be engaged in trade or business in Puerto Rico – will be subject to a 29% withholding at source.

Compensation paid to non-resident employees contracted by the foreign subcontractor

Same treatment as with local and foreign service providers U.S. citizens are subject to a preferential 10% withholding at source rate, while non-resident aliens are kept at the 29%.

It is imperative that foreign service providers, foreign subcontractors and subcontracting non-resident individuals must complete the Puerto Rico’s Merchants Registration through the PRTD’s SURI system, within thirty (30) after the execution of the service contract.

Also, pursuant to the PRTD’s Internal Revenue Bulletin No. 17-26, every entity or individual must review the particular facts and circumstances of their operations in Puerto Rico to determine if it they are engaged in trade or business in Puerto Rico, and perform the corresponding registrations with the PRTD for income and payroll tax compliance as well as other pertinent agencies (e.g. the Puerto Rico Department of State, the Municipal Revenue Collection Centre, Municipality, etc.).

Services rendered to the government by the local or foreign service providers will not be subject to Sales & Use Tax (“SUT”).

Moreover, goods introduced into Puerto Rico by the local or foreign service providers, as well as by foreign subcontractors, to be used in the contracted services with the government will be exempt from the excise taxes imposed by the Code’s Subtitle C for a six (6) month period.

Also, every importer that temporarily introduces otherwise taxable goods that will be used on contracted services with the government, and which will be later re-exported within a six (6) month period, will not be subject to the SUT. The importer can request that this initial six-month period be extended for an additional six months.

Nonetheless, payments between local or foreign service providers, and foreign subcontractor or individuals, will be subject to the special 4% SUT imposed by sections 4210.01 (c) and 4210.02 (c) of the Code. 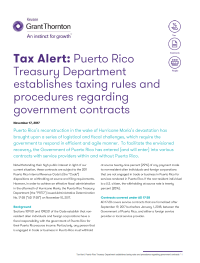