On November 6, 2017, the Committee for the Authorization of Expenditures and Tax Concessions issued Resolution No. 2017-10 to modify the amount and time limitation rules established by Resolutions 2017-05, 2017-08 and 2017-09 for the use of Tax Credits granted under various Puerto Rico incentive acts.

The Committee issued a series of resolutions to guide the process for the assessment, concession and use of tax credits for both pending and new petitions.  Particularly, Resolution No. 2017-05 limited the use of tax credits granted on or before March 7, 2017 for taxable years 2017 and onwards.  Meanwhile, Resolutions No. 2017-08 and 2017-09 established that approved tax credits may only be used to offset up to a maximum of 25% of the income tax liability for the taxable year in question (the “25% Limitation Rule”) and imposed a 4-year term (with an optional 3-year extension) for their usage (the “Time Limitation Rule”), among other things.

The aftermaths of Hurricane María brought in insult to injury to the island beleaguered economy, and although austerity measures were put in place to steer Puerto Rico towards fiscal responsibility and (hopefully) economic revitalization, these had to be rethought in light of this new wind-swept reality.  Conscious of its integral role in the government’s recovery apparatus for Puerto Rico, the Committee issued Resolution No. 2017-10 on November 6, 2017 to (i) amend the 25% Limitation Rule and (ii) implement special rules regarding the Time Limitation Rule.

Nonetheless, the holder of tax credits granted pursuant to the pending or completed tax credit applications of Resolutions No. 2017-08 and 2017-09, respectively, can request the Committee to waive the 25% Limitation Rule.  Said request – which must be in writing – must show that the waiver will contribute to the government’s financial recovery efforts by means of new investment and job creation.  If accepted, the Committee may issue either a full or partial waiver.

Furthermore, if the one-year extension is requested with respect to credits that were granted in accordance with their corresponding incentive laws and are governed by Resolution No. 2017-05, the eligible holder may claim the tax credit against its income tax liability without it being subject to the 25% Limitation Rule in 2018.  The 25% Limitation Rule would commence in the taxable year 2019.

If the eligible holder requests the one-year extension and subsequently transfers a part or all of the tax credit, the acquirer will automatically benefit from the extension.

Resolution 2017-10 will not apply to credits that ere self-determined by the applicant and claimed in a Puerto Rico income tax return without requiring the prior resolution or determination of the governing agency. 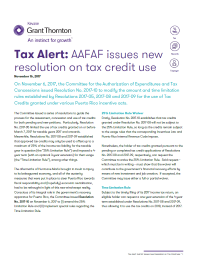