Puerto Rico tax reform is set to be approved

The Puerto Rico House of Representatives is set to approve the long-awaited tax reform during the current session, hopefully within a few days after this publication.  As noted on our April 30, 2018 Tax Alert, the proposed reform aims to streamline our current tax regime by instituting fiscal measures that promote growth and foster greater accountability from all sectors.

On the aforementioned April publication, we provided a birds-eye view on many of the major changes contained within House Bill No. 1544.  Chief among these were the proposed reduction of income tax rates for both individuals and corporations, the reduction of the Special Sales and Use Tax (“SUT”) on B2B transactions from 4% to 2% (along with its eventual elevation, and the reduction of the SUT on prepared foods from 10.5% to 5.5%.

And just when its approval was in sight, the legislative piece was stopped in its tracks in order to address various considerations as demanded by the Puerto Rico legislature (the original proposal was submitted by the Puerto Rico Governor).  In the intervening months, further changes have been promoted – from the resurgence of the Value Added Tax and the purported and discarded elimination of the property tax on inventories, to the legalization of slot machines and the creditability of the foreign corporation excise tax.  Moreover, the road to the Reform’s completion and endorsement has been framed within the ongoing discussions and declarations of the Fiscal Oversight Board under PROMESA (the “Board”).

In light of the Board’s strong overture in reducing government spending while increasing revenue collection, Puerto Rico’s myriad of fiscal benefits have been placed under a magnifying glass, with both the Legislative and Executive Branch entertaining the idea of further curtailing tax exemptions and credits, even more than what was already envisioned by the Legislature in the proposed Puerto Rico Incentives Code.  With the Board possibly calling for cuts on the current tax abatements, should the purported tax cuts take place under the Tax Reform, the pressure is on the beleaguered Puerto Rico Incentives Code that was proposed to simplify the concession of tax benefits under the various incentive laws to further trim its offerings.

For now, we will have to wait and see if the legislative bill strikes the right balance between fiscal restraint and sustainable growth.

We will continue with our commitment to keep you up-to-date with these tax-related developments.  Please contact our Tax Department should you require additional information regarding this or any other tax issue.  We will be glad to assist you. 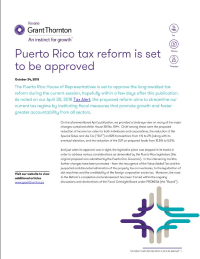