Pursuant to §937(a) of the IRC, an individual will be considered a bona fide resident of a U.S. possession if he/she (i) is physically present in the U.S. territory for a determined period of time during the taxable year; (ii) does not have a tax home outside such possession during the taxable year; and (iii) does not have a closer connection to the United States or a foreign country than to such possession. These are known, respectively, as the (i) Physical Presence, (ii) Tax Home and (iii) Closer Connection tests.

Regarding the Physical Presence Test, it is usually complied with by spending at least 183 days within the possession during the tax year in question, though there are other ways to satisfy it. As a general rule, an individual is treated as being present in a relevant possession on any day that he/she is physically present in that location at any time during the day.

Temporary Amendment to Physical Presence Test under IRS Notice No. 2017-56

In response to the unprecedented destruction that both Hurricanes Irma and Maria brought upon the U.S. Virgin Islands and Puerto Rico, FEMA issued Notices of a Presidential declaration of a major disaster for both territories.

IRS Notice No. 2017-56 provides relief for individuals who may otherwise lose their status as a “bona fide resident” of the USVI or Puerto Rico as a result of the prolonged dislocation caused by Hurricanes Irma and Maria by extending the above referenced the 14-day period allowed under §1.937-1(c)(3)(i)(C)(1) of the IRC Regulations to 117 days, beginning on September 6, 2017, and ending on December 31, 2017.

Consequently, any individual who is outside of Puerto Rico on any day during the 117-day period will be treated as leaving or being unable to return to Puerto Rico, and these days will not be counted against him/her for purposes of complying with the Physical Presence Test. 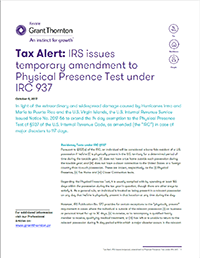