Through one or more of the four SBA socioeconomic programs or other designations, small businesses can receive federal prime contracts based on full and open competition and through set-asides and sole source awards.

A new report issued by the United States Government Accountability Office (GAO) examined trends in small business contracting and the use of SBA programs in Puerto Rico from fiscal years (FY) 2006 through 2016. In addition, GAO interviewed stakeholders such as federal agency contracting officials, industry associations in Puerto Rico, and economic development entities to obtain their views on any challenges small businesses in Puerto Rico face in obtaining federal contracting opportunities. The report also included the steps SBA and other agencies have taken to assist Puerto Rico small businesses in obtaining federal contracting opportunities. However, GAO did not assess the extent to which steps SBA and other agencies have taken address the challenges stakeholders identified nor it made recommendations in the report.

In June 2016, US Congress enacted the Puerto Rico Oversight, Management, and Economic Stability Act, commonly known as PROMESA to address Puerto Rico’s debt crisis and fiscal condition. PROMESA includes a provision for GAO to evaluate the application and utilization of SBA programs in Puerto Rico (including contracting activities relating to HUBZone small business concerns) and identify any provision of federal law that may create an obstacle to the efficient implementation of such programs.

In June 2016 also, the SBA announced that it had revised the definition of “qualified census tracts” eligible to be designated as HUBZones to provide additional opportunities in federal contracting for small businesses in Puerto Rico. By removing the previous limitations, the SBA expanded the number of eligible census tracts in Puerto Rico from 260 to 776 making nearly all of Puerto Rico qualify as a HUBZone (Figure 1).

As a result of the new eligible census tracts, a total of 30 businesses submitted applications to the HUBZone program between June 2016 and March 2017; 16 of the 30 businesses had primary locations in newly designated HUBZone-qualified census tracts.

Figure 1: HUBZone areas in Puerto Rico before and after the SBA changed the definition of qualified census tracts in June 2016 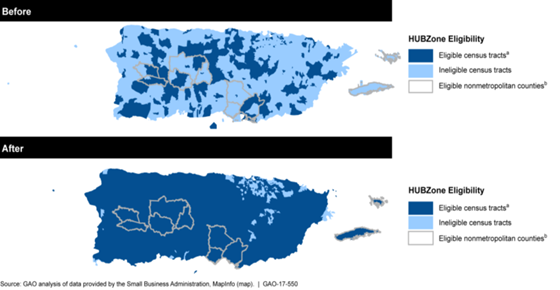 Below is a summary of the trends GAO identified in federal contracting obligations to small businesses in Puerto Rico: 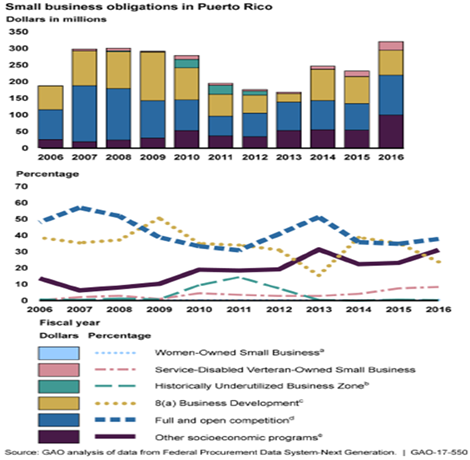 According to GAO, many of the challenges that stakeholders identified were similar to those expressed in the 2012 report by the same office, Government Contracting: Federal Efforts to Assist Small Minority Owned Businesses, which explored challenges faced by small businesses nationwide, including minority-owned businesses, in seeking federal contracting opportunities.

The challenges expressed by stakeholders in Puerto Rico included the increased use of contract bundling or consolidation, difficulty in meeting contract procurement requirements, and lack of knowledge about the federal procurement process.

The challenges were organized in 9 categories:

Despite the challenges and concerns expressed by various stakeholders, none of the stakeholders that were interviewed identified federal laws that have created unique challenges for small businesses in Puerto Rico in obtaining federal contracting.

Nevertheless, SBA officials are taking steps to address these challenges. Efforts such as trainings on contracting programs, one-on-one appointments to help businesses navigate the federal contracting process, and outreach programs have been made. According to SBA officials in Puerto Rico, a total of 61 training events with 424 attendees were held during 2016. On April 24, 2017, SBA announced that it had approved the first Puerto Rican surety company to participate in its Surety Bond Guarantee Program. The limitations in SBA’s online system are also being addressed. SBA officials stated that they are in the process of transitioning to a new mapping system that should provide more accurate information. It is estimated that the new system will be available in late 2017. 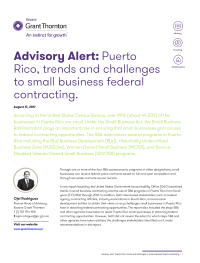