The Board issued the proposed ASU, Targeted Improvements to Related Party Guidance for Variable Interest Entities, which is intended to improve financial reporting related to consolidation of variable interest entities (VIEs). The proposal is being issued in response to stakeholders’ observations that ASC 810, Consolidation, could be improved when an entity applies the VIE guidance to private entities under common control and to other situations where related parties are involved. The main provisions of the proposal are summarized below.

Under the existing guidance codified from ASU 2014-07, Applying Variable Interest Entities Guidance to Common Control Leasing Arrangements (a consensus of the Private Company Council), a reporting entity that is a private company can elect to apply an accounting alternative exempting it from being required to apply the VIE guidance to certain common control leasing arrangements. Under the proposed amendments, a reporting entity that is a private company could also elect an accounting alternative to not be required to apply VIE guidance to all legal entities under common control if both the parent and the legal entity being evaluated for consideration are not public business entities.

This alternative accounting policy election would apply to all of the current and future legal entities under common control, so an entity would not be permitted to apply this election to select common control arrangements. If an entity elects the alternative accounting policy, it would still be required to follow other consolidation guidance (such as the voting interest entity guidance) unless another scope exception applies.

Further, if an entity elects the alternative accounting policy, it would be required to provide certain disclosures about its involvement with and its exposure to the legal entity that is under common control.

The proposal would instead require that if substantially all of the VIE’s activities either involve or are conducted on behalf of one party within the related party group, that party would be the primary beneficiary of the VIE. However, when substantially all of the activities of the VIE do not involve and are not performed on behalf of any single entity in the related party group, the proposal would require the reporting entity to consider whether it has a controlling financial interest in the VIE by considering certain factors (none of which are individually determinative) that indicate whether the reporting entity should attribute decision making to itself.

The proposed guidance also states that after considering those factors, situations may exist in which no single party in a shared power arrangement or within a related party group may conclude that it has a controlling financial interest in the VIE. When related parties under common control, as a group, have a controlling financial interest in a VIE, the parent entity would consolidate the VIE unless a scope exception applies, regardless of the conclusions reached by the individual related parties that are under the parent’s control.

The Board will set the effective date for the proposed amendments when it considers feedback on the proposal. Early adoption would be permitted.

Entities that have already adopted ASU 2015-02 would be required to apply the amendments in the proposal retrospectively by restating all prior periods presented.
Comments on the proposal are due Sept. 5. 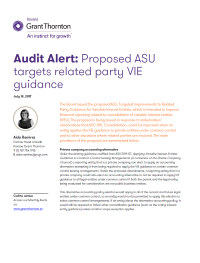