Conscious of its impact and far-reaching implications, the Government Administration has trumpeted the virtues of Acts 20, 22 and 73; and revised its contours to further promote the exportation of services by both local and foreign business, and attract more foreign investors to Puerto Rico.  As part of the latest round of legislations that seek to spur economic growth within the Island, on July 11, 2017, the Governor of Puerto Rico signed Acts Nos. 43, 44 and 45, which amend Act 20 of 2012, the storied Act 73-2008 and Act 22 of 2012, respectively. These amendments are summarized below.

Article 3(k) is amended to include medical and labs services, as well as medical tourism services and telemedicine facilities, as Eligible Services under Act 20-2012.  Regarding telemedicine services, at least thirty percent (30%) of its contracted physicians must be Puerto Rico residents.

Also, the definition of what constitutes an “international trading company” for Act 20-2012 purposes is broadened in order to allow for eighty percent (80%) of their gross income to be derived from trading activities and any other eligible export service contained within Act 20-2012, unlike its original definition, whereby the company had to derive 80% of their gross income solely from trading activities to be considered as such.

Act No. 187 of 2015 imposed a minimum employment requirement of five (5) to be eligible for the Act 20-2012 tax benefits.  Act 43-2017 scrapes the fixed employment requirement altogether and instead empowers the Secretary of Commerce and Economic Development (the “Secretary”) to establish, through regulations or administrative orders, the evaluation criteria for the concession of Act 20-2012 Tax Grants, which will include (but not be limited to) (i) job creation, (ii) capital investment, and (iii) direct or indirect contributions to Puerto Rico’s economy.

Moreover, the Secretary is granted considerable discretion to demand that, in the event that a Petitioner requires employees or independent contractors for its operation, it hires Puerto Rico residents or entities engaged in trade or business in Puerto Rico for said operations.

Nevertheless, businesses with approved tax exemption decrees or with submitted tax exemption applications under Act 20-2012, that have already hired direct employees may not dismiss such employees in light of Act 43-2017.

Act 187-2015 created the Interagency Validation Portal for the Granting of Incentives for the Economic Development of Puerto Rico (“Portal”) and established the Certificate of Compliance (“Certificate”) to be issued by the corresponding governmental agencies. Act 43-2017 eliminates references to both the Portal and the Certificate and instead promotes the creation of an electronic database, along with the Puerto Rico Industrial Development Company (“PRIDCO”) and the Puerto Rico Treasury Department, to store and update information related to businesses covered by Act 20-2012.  To ensure compliance with the agreed-upon terms and conditions, the Secretary, through the Puerto Rico Office of Industrial Tax Exemption, will perform an audit every two (2) years of the issued Tax Grants.

In an effort to spur economic growth for to small and medium scale companies and start-ups, Act No. 44 of 2017 (“Act 44-2017”) amends Section 2 of Act 73-2008 to state that any business that undertakes scientific or industrial R&D for the development of new products, services or industrial processes, as well as the improvement of existing products through basic or applied research, will be considered an Eligible Business.

Act 44-2017 also loosens the inherent restrictions for the concession of Tax Credits under Section 5 of Act 73-2008, by expanding the definition of “eligible investment” to include proceeds from a federal grant, aid or financing.

Lastly, it destines ten percent (10%) of the Special Economic Development Fund created under Section 17 of Act 73-2008 for the creation of special programs that incentivize and promote investment in (i) science, technology and innovation, (ii) exportation of goods and service related to science, technology and innovation, and (iii) training to small and mid-sized businesses.

Act No. 45 of 2017 (“Act 45-2017”) requires that the Grantee’s Exempt Annual Report for the first year as a bona fide resident of Puerto Rico details his/her compliance with the terms and conditions of the Tax Grant on the previous year, including evidence of filing Form 8898 with the U.S. Internal Revenue Service.

Also, Grantees are now obligated to contribute at least five thousand dollars ($5,000) annually to a non-profit entity operating in Puerto Rico that is duly certified under Section 1101.01(a)(2) of the 2011 Puerto Rico Internal Revenue Code, as amended.  Understandably, the non-profit entity cannot be controlled by the Grantee.

Note: As highlighted in our Tax Alert dated July 1, 2016, the Puerto Rico Oversight, Management, and Economic Stability Act (PROMESA), seeks to provide Puerto Rico with fiscal and economic discipline through the creation of a control board, among other things. Virtually every fiscal decision by the Government of Puerto Rico will be made or approved by the Oversight Board created by PROMESA. On this regard, the board has authority to prevent the execution or enforcement of a contract, rule, executive order or regulation to the extent that it is inconsistent with the approved fiscal plan. 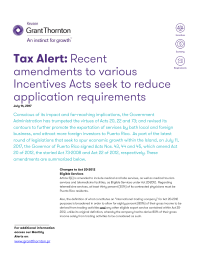