Municipalities have felt the tug of the monetary constraints that have put in place to curtail the current fiscal crisis. Fiscal assignments from the Central Government, long counted upon are but memories of a not-so-distant past, rousing Municipalities to come up with creative (or obvious) ways to cover the assignment shortfall.  This has resulted in various municipalities issuing new ordinances in the past few months to this end.  In this Alert we specifically addressed two recent ordinances issued by the municipalities of Ponce and Caguas.

Also looking to gather additional financial resources for its constituents, the Municipality of Caguas instituted on June 8, 2017, Municipal Ordinance No. 28 to establish a temporary zero point thirty-five percent (.35%) municipal contribution (“Aportación Empresarial Municipal”) to both individuals and business that are subject to the Municipal License Taxes and whose declared Volume of Business is equal to, or exceeds, $3MM for the calendar year ended on December 31, 2016.

The AEM, as it is known for its acronym in Spanish, will commence on July 1, 2017, and will be effective for Fiscal Years 2017-218 through 2020-2021.  The Municipality will bill the taxpayer and the tax will be due on August 15 of every year.  Nevertheless, the Taxpayer will be allowed to pay for the AEM in four (4) installments:

If the taxpayer fails to comply with the payment of the AEM, the Ordinance allows for the imposition of one percent (1%) monthly interest and surcharges of up to twenty-five percent (25%) on any unpaid amount. 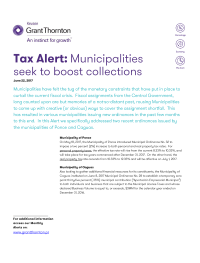