Recent changes to Sales and Use Tax rules on Internet Sales

After much deliberation and discussion, on May 23, 2017 House Bill No. 849 was signed into Law by Gov. Ricardo Rosselló, Act No. 25 of 2017, effectively amending the 2011 Puerto Rico Internal Revenue Code (the “Code”) to expand the concept of “nexus” for sales and use tax purposes as it relates to out-of-state sellers who lack physical presence in Puerto Rico, but sell tangible property to persons within the island.

The responsibility for the withholding and/or payment (depending on whether one is a seller o buyer) of sales and use taxes (“SUT”) on tangible personal property acquired over the internet has been long established on the Code ever since the various amendments under Act No. 42 of 2013 (“Act 42-2013”). Nonetheless, as enacted, Act 42-2013 did not have enough traction to deal with the existing conflict between the U.S. Supreme Court physical presence requirement under Quill v. North Dakota1 for the collection of SUT, and the ever-growing online shopping tendencies of consumers. Though many retailers have a brick-and-mortar store within a particular jurisdiction, which counts as nexus for the collection of SUT on online sales, online giants like amazon.com, eBay and Alibaba eschew physical stores. Therefore, since there is no “physical” presence, under Quill, they have no nexus – and no nexus means there is no obligation to collect and remit SUT.

Conscious of this “unfair competition”, and acknowledging that the current Code provisions are tantamount to a gentle reminder, lacking enforceability at a practical level, Act No. 25 of 2017 was set in place.

Among its many changes, Act 25-2017 amends Section 4010.01(h) of the Code to establish that a “merchant” will have Puerto Rico nexus for SUT purposes when it advertises directly through mail, radio, TV, internet sites, social media or any other electronic means, or when it sells and sends (be it directly or through a third party) tangible personal property from any state or foreign country to any person in Puerto Rico through an internet link. In both instances, the business activity must continuous, recurring and in the ordinary course of business.
Furthermore, Act 25-2017 introduces the Non-withholding Agent (“NWA”) to the SUT parlance. Namely, a NWA is a merchant that sells tangible personal property through several of the above referenced means (i.e. catalogs, regular mail, social media, e-commerce, etc.) and whose sole contact with the Puerto Rico jurisdiction is delivery of tangible personal property to a resident or a person engaged in trade or business in Puerto Rico. As a NWA, the merchant is not responsible for the collection and remittance of the SUT, but nonetheless it must notify the Buyer, on the invoice, bill or receipt, of his/her obligation to pay the SUT on said transaction.

1.  Notify the Buyer of his/her obligation to pay the SUT on said transaction. This notification must be made on the invoice, bill or receipt that accompanies the transaction.

2.  Send quarterly reports to the Secretary of the Treasury (the “Secretary”) on purchases made by Puerto Rico buyers. These reports will contain:

3.  Send a yearly notice to all Puerto Rico buyers that acquired merchandise from the NWA, on or before January 31, with the information required on the quarterly reports.

If the NWA refuses to provide the above referenced information, the Secretary may compel the NWA to appear before him/her to address the information requirement, and to request the confiscation of property in contempt.
Act 25 -2017 further amends Section 4041.02 to include the municipal portion of the SUT on the amount to be paid to the Puerto Rico Treasury Department by the person that imports tangible personal property into Puerto Rico.
In the event that taxpayer fails to timely and appropriately file any of the SUT returns required under Section 4041.02 – that is, the Declaration of Imports, Monthly Tax on Imports and the Monthly SUT returns – a ten percent (10%) penalty on the tax due will be imposed.

In the case of a NWA’s failure to comply with the newly-required reports and notifications, the penalties are the following:

(i) $100 for every failure to properly notify the buyer of his/her responsibility to pay the SUT;

Note: As highlighted in our July 1, 2016 Tax Alert, PROMESA seeks to provide Puerto Rico with fiscal and economic discipline through the creation of a control board, among other things. Virtually every fiscal decision by the Government of Puerto Rico will be made or approved by the Oversight Board created by PROMESA. On this regard, the board has authority to prevent the execution or enforcement of a contract, rule, executive order or regulation to the extent that it is inconsistent with the approved fiscal plan. 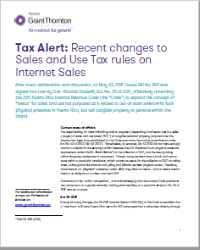