Conscious of the recuperation process Puerto Rico is going through after the passing of Hurricanes Irma and María, on April 10, 2018 the Puerto Rico Treasury Department issued Administrative Determination No. 18-07 (“AD 18-07”) to provide an automatic extension of six (6) months for the filing of 2017 Income Tax Returns.  This Administrative Determination is applicable to individual taxpayers who have not been able to complete with all the information for their returns and to businesses who are behind with the accounting of their business.  In addition to this automatic extension, AD18-07 also provides the procedure to request the cancellation of (i) surcharges for late payment of the amount of tax due for 2017 and (ii) the late payment penalty for 2017 estimated taxes.

Automatic extension of time under Section 1061.16(a)

For individuals who are abroad, Section 1061.16(a)(3) provides an additional three (3) months for filing the returns in addition to the automatic extension of time.

Request for Automatic extension to submit the 2017 Income Tax Return

The Puerto Rico Treasury Department has determined to grant to ALL taxpayers who request an automatic extension of time to file the 2017 Income Tax Return a six month period, instead of the 3 months provided under Section 1061.16(a)(2).  The 6-month time extension is applicable to taxpayers with both natural and fiscal years beginning during 2017.

In the case of taxpayers whose taxable year ended on December 31, 2017 and who have requested an automatic extension of time by April 17, 2018, the extended filing date for the income tax return will be October 17, 2018.  For corporations and limited liability companies, the 6-month automatic extension will apply only if the entity files its 2017 Income tax return through electronic means.

The Puerto Rico Treasury Deparment will only grant the 6-month automatic extension to those hard copy filers that are identified and allowed to file as such, pursuant to Internal Revenue Circular Letter No. 18-03; namely:

Regular Corporations that do not meet the filing limitations mentioned above but file their automatic extension in a timely manner as established by the Code will be granted the regular 3-month extension instead.

In the case of conduit entities whose taxable year closed December 31, 2017 and have requested an automatic extension of time, AD 18-07 provides until September 17, 2018 to file the Informative Income Tax Return Pass-Through Entity.

It is important to highlight that individual and regular corporations are required to file their request for automatic extension only by electronic means and pay any contribution owed with the filing of the automatic extension to avoid the imposition of interest, surcharges and penalties.

Generally, a taxpayer who fails to pay the totality of the tax amount due with its income tax return will subject to interests and surcharges for the late payment.  AD 18-07 tables this general rule for the Taxable Year 2017.  Basically, a taxpayer who timely requested an automatic extension and at the time of filing the 2017 tax return has a pending tax balance, will be able to request the cancellation of the applicable late payment surcharges, if the following requirements are met:

To request the cancellation of surcharges, AD 18-07 requires the taxpayer to include an supplemental document together with the 2017 electronic return whereby it express the reasons why it was not able to pay the amount due by the established due date.

Cancellation of the penalty for non-payment of the estimated tax for individuals, corporations or partnerships

Sections 6041.09 and 6041.10 of the Code establish a ten percent (10%) penalty of the unpaid amount, in the case of a failure to pay an installment of the estimated tax within the time prescribed or when the taxpayer makes an incomplete payment of the estimated tax installment, unless it shown to the satisfaction of the Secretary of the Treasury that said failure was attributable to reasonable cause and not to willful neglect.

For taxable year 2017, AD 18-07 will allow taxpayers to request the cancellation of the 10% penalty if the following requirements are met

Moreover, the taxpayer must compute and include the applicable 10% penalty on its income tax return.  If the taxpayer understands that it complies with the above referenced requirements, it will not need to remit the penalty amount to the Puerto Rico Treasury Department.

To request the cancellation of the 10% penalty the taxpayer must send an email to: infosac@hacienda.pr.gov or visit any of the taxpayer service centers with the following documents: 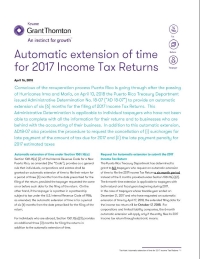