No one can deny that 2017 was a momentous year for Puerto Rico.  From the hopeful anticipation - or outright disdain - of new political administrations in the US and Puerto Rico, to the challenges of PROMESA and its Fiscal Oversight Board, many were the events that touched upon the varied areas of daily lives and shaped the days to come; and tax issues were not left unscathed.

Part of the on-going conversation on economic growth has been the necessity for a simpler tax system, along with its efficient enforcement, to attract new capital into Puerto Rico and simplify the tax consequences when doing business in Puerto Rico.  Conscious of Puerto Rico’s storied tax incentives tradition and its importance to the envisioned financial recovery, as well as the fiscal requirements and constraints imposed by PROMESA, the current administration sought to harmonize the various incentive laws in Puerto Rico into a single, cohesive document to simplify the concession of fiscal benefits as well as the administration of its legal requirements.  In addition, much was commented in regards to an upcoming Puerto Rico tax reform.  Regrettably, its fruition was delayed or deferred to deal with a myriad of pressing matters – none more forceful than the passage of hurricane Maria.

In light of such devastation, the Puerto Rico Treasury Department was given considerable leeway to take all reasonably prudent and necessary measures to assist taxpayers in the aftermath of hurricane Maria, issuing bulletins, determinations and circular letters on a (seemingly) weekly basis to postpone filing due dates and exempt prepared foods from sales & use taxes, among many other matters.

As noted in our December 26, 2017 Tax Alert, President Trump’s Tax Cuts and Jobs Act contains a series of provisions that may affect Puerto Rico’s stagnant economy in various ways. Tax planning is a key element to properly consider these important international ramifications.

With the much-expected new Puerto Rico Incentives Code and Tax Reform, we are probably in the middle of an historical juncture that will change our governmental structure, re-formulate our business environment, re-discover Puerto Rico’s unique history and position in the Caribbean, and direct the future of our economy.  We will keep you alert of the ongoing tax developments in Puerto Rico. 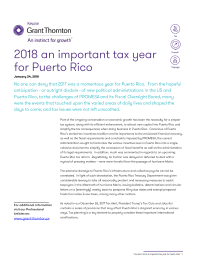