On December 31, 2018, the Puerto Rico Treasury Department issued Internal Informative Bulletin No. 18-24, to provide taxpayers guidance with regards to the partial tax withholding waivers for services rendered in Puerto Rico, in light of the agency’s publications prior to the enactment of Act 257-2018  (Puerto Rico Tax Reform) on December 10, 2018.

Pursuant to Section 1062.03 of 2011 Puerto Rico Internal Revenue Code, as amended (the “Code”) (as it read before the enactment of Act 257-2018), every person, natural or juridical, that in the conduct of a trade or business or an income producing activity in Puerto Rico pays for services rendered in Puerto Rico must withhold 7% of said payment.  Nonetheless, 1062.03(g) allows the Secretary of the Treasury to grant total or partial waivers from said 7% withholding at source tax.  In the event of a partial waiver, the tax rate is reduced to 3%.

In the exercise of said prerogative, on December 4, 2018, the Puerto Rico Treasure Department issued Internal Revenue Circular Letter No. 18-15 (“CL 18-15”) to establish the administrative procedures for the request and issuance of the Total and Partial Tax Withholding Waiver certificates through the Unified System of Internal Revenue (“SURI”, for its acronym in Spanish).

For taxable years commencing after December 31, 2018:

In light of the above, the Puerto Rico Treasury Department issued Informative Bulletin No. 18-24 to provide further clarifications on these changes, specifically, to holders of partial tax withholding waivers.

On December 31, 2018, the Puerto Rico Treasury Department released Internal Revenue Informative Bulletin No. 18-24 (“IB 18-24”) to clarify that, effective January 1, 2019, payments made to service providers with a Partial Tax Withholding Waiver processed for the concept of services rendered will still be subject to a withholding at source of 6%, as established under Act 257-2018, regardless of the 3% stated in the waiver issued. 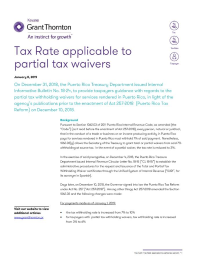